Back To The Gutters: That DSS Invasion Of Sacred Precincts Of A Court Of Law 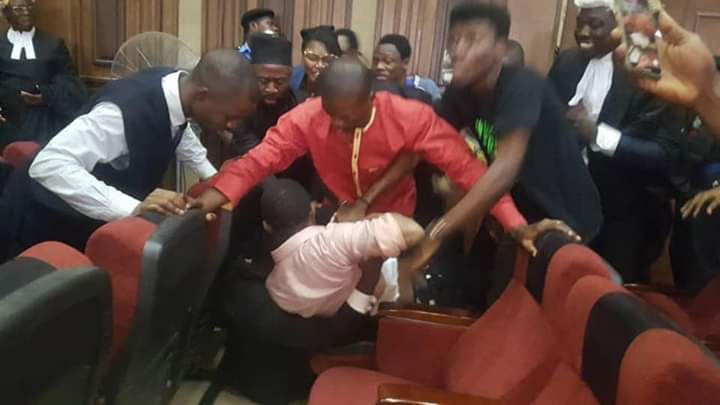 On Friday, 6th November, 2019, the DSS, the nation’s secret Service in the mould of FBI or CIA, danced naked in the streets, when it invaded a court of Law in an attempt  to arrest Omoyele Sowore, accused of treasonable felony over his “Revolution Now” mantra.

Recall that the DSS had finally bowed to a 24 hour ultimatum issued by Justice  Ijeoma Ojukwu, to release Sowore and pay him N100,000 damages.

It was a show of extreme shame, disgust and degeneracy to see a whole secret security apparatchick descend to the abysmal gutters of physically invading the hallowed chambers of a court of Law to forcefully arrest a suspect, viet armis, by resort to crude and unorthodox Hitlerite Gestapo tactics in a supposed constitutional democracy.

The video that went viral about this ugly and ill-advised outing that has further reduced our worth in the perception of the international community is condemnable in every sense of the word.

It downgrades us, belittles us, and our humanity and makes us laughable before civilised nations.

We beheld an unarmed, helpless and hapless Sowore being dragged on the floor, helplessly, like a vanquished prisoner of war (PoW) just taken as ransom.

Justice Ojukwu had to be spirited off to her chambers by her security.

When a  government that is supposed to respect and protect institutions, citizens’ rights and rule of law, invades and desecrates the SACRED precincts of a Court of law, then we are in trouble.

When the same DSS invaded Judges’ homes in October,2016,terrorizing the hapless Judges and their families, many uninformed Nigerians hailed the misadventure as a sign of fighting corruption.

I had vehemently disagreed then, citing section 36 of the 1999 Constitution and section 7 of the ACJA that inure in us our humanity and human dignity and respect.

I had warned then of a possible descent into anarchy and chaos if the masked DSS goons were not immediately restrained and halted on their tracks.

Friday’s disgraceful and atrocious outing by the DSS is the clearest exemplification of a rudderless state in search of a redemptive deus ex machina.

A government that is short on tolerance to criticism, plurality  of voices and opposition and which serially violates citizens’ rights and disobeys court orders is a ready recipe for organised disenchantment.

Our constitutional democracy should be one modelled on the rule of law and not on the rule of the thumb of a benevolent ruler, even if dictatorial, tyrannical, absolutist and fascist.

Amaechi: How Spanish Police, My Dexterity Saved Me