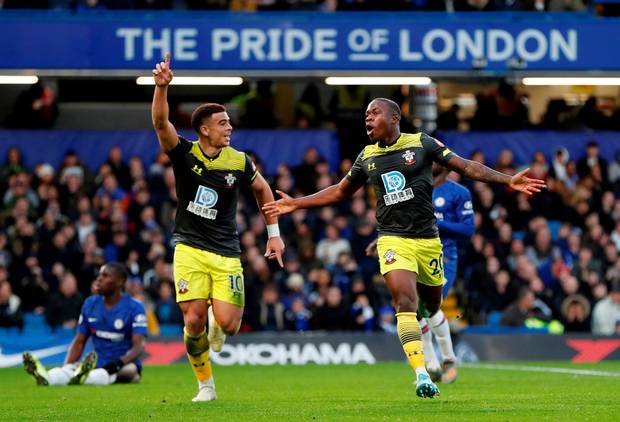 Goals from Michael Obafemi and Nathan Redmond earned improving Southampton a surprise 2-0 win at Chelsea in the Premier League on Thursday.

Obafemi broke the deadlock with his first goal of the season, bursting inside from the right and curling into the top corner after a tight opening half hour.

Frank Lampard changed his side’s formation from 3-4-3 to 4-2-3-1 at the break and nearly earned an instant dividend as substitute Mason Mount set up Tammy Abraham, who flashed a shot into the side netting.

Southampton winger Redmond was denied by Kepa Arrizabalaga on the break but coolly finished for the visitors’ second after an impressive team move to silence Stamford Bridge.

The hosts struggled to break down Southampton’s tight defence, and Ralph Hasenhuttl’s side rise to 14th, three points clear of the relegation zone, building on last weekend’s win over Aston Villa.

Chelsea stayed fourth with 32 points from 19 games and must pick themselves up for their visit to Arsenal on Sunday.

This performance added to recent home defeats by West Ham and Bournemouth, with Lampard’s team recording only two wins from their last seven league games, along with five losses.

Chelsea’s impressive victory at Tottenham on Sunday was quickly forgotten on a drab afternoon in wet west London.

“It’s the same story as a few of the last home games,” said Lampard.
“We have to work, break defensive lines and do more in an attacking sense.

“If we want to stay (in the top four) we have to win more than we have done recently at home.”

Hasenhuttl ran onto the pitch to celebrate at full time and was hailed by Saints supporters long after the final whistle after going over to them.

“You can have a tactical plan but without passion it doesn’t work,” a delighted Hasenhuttl told reporters.

“We stayed brave, tried to keep them far away from our goal and it was by far the best performance this season.

“There’s still a long way to go, but in the first two or three months we played like a relegation team, now we’re playing like a Premier League team.”