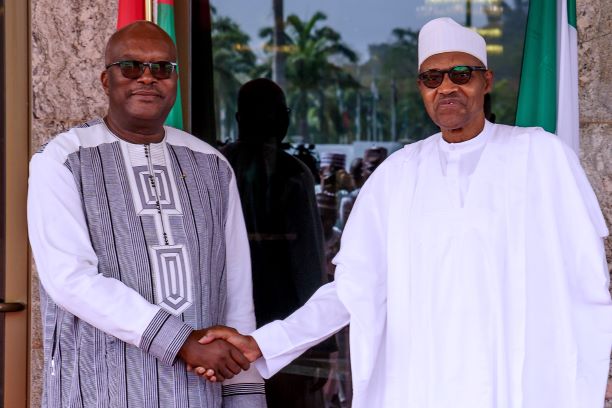 President Muhammadu Buhari says the issue of partial closure of Nigeria’s land border to goods from neighbouring countries will be determined by the report of a tripartite committee made up of Nigeria, Benin, and Niger Republic.

Malam Garba Shehu, the President’s Senior Special Assistant on Media and Publicity, said the Nigerian leader stated this when he received President Roch Marc Christian Kabore of Burkina Faso at the Presidential Villa, Abuja, on Friday.

He explained that Nigeria’s decision to partially close the border was purely to safeguard national security.

The President of Burkina Faso is the Chairman of the ECOWAS Committee mandated to resolve the issue of the border closure.

Buhari said: “Our major problem is security; the inflow of weapons, ammunition, and drugs.

“We have witnessed a decline in banditry using such weapons since the partial closure of the border.

“Also, our farmers are now able to sell their rice since we stopped the inflow of foreign rice, usually dumped in the country.’’

“I will work as fast as I can as soon as I receive the report,’’ the President added.

Earlier, the President of Burkina Faso told Buhari that he came on the visit following the mandate of ECOWAS to resolve the issues that culminated in the partial closure of the border.

He added that some of the challenges had been discussed and agreed on, urging the Nigerian leader to reconsider the position of the country.

Also speaking to State House correspondents after the meeting, the Minister of Foreign Affairs, Geoffrey Onyeama, said Buhari was asked to consider possible interim measures on the border closure by allowing the import of perishable goods.

He said: “One of the issues that came up, some of the warehouses along the borders and the request that as part of the solution to the problem that these warehouses should be dismantled.

“So,  President Kabore was looking at the possibility of interim measures of allowing perishable products/goods to start coming in immediately.”

Why Doctors Are Turning To Politics, Relocating From Nigeria – NMA