Why Lagos APC Is Backing Oshiomole 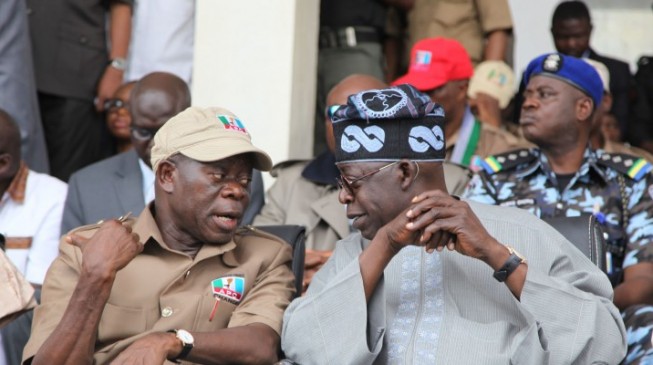 Monday’s vote of confidence on embattled National Chairman, All Progressives Congress (APC), Adams Oshiomhole by the Lagos State chapter of the party may not have come as a surprise.

National Leader of the party, Bola Tinubu who was a former governor of Lagos and has remained in charge of the party structure in the state was among those who publicly  endorsed the candidature of Oshiomole for the position of National Chairman.

Reports say Tinubu has an eye for the Presidency in 2023.

The ongoing crisis which culminated in last Wednesday’s suspension of Oshiomole by a Federal Capital Territory (FCT) high court following an application by some party members that he had been suspended by his ward in Etsako, Edo State is part of the bid to grab the soul of the APC for the 2023 presidential fight.

The power-play is between the pro and anti-Oshiomhole factions with the party’s governors and their national leader, Asiwaju Tinubu on opposing sides.

The vote of confidence in Oshiomole came via a statement made available by the party’s state publicity secretary, Seye Oladejo.

The statement attributed the party’s victory in the general election to the leadership of the National Chairman.

The party said it regards the crisis as “testing the waters for the ultimate strategy of the enemies within to decimate the party before their final onslaught.

The statement continued that:

“Lagos APC has resolved to throw its weight behind the National Chairman, Comrade Adams Oshiomhole, over the needless and avoidable crisis in the party.

“We can definitely not dismiss his monumental achievements which included breaking new grounds to the discomfort of the opposition party. As much as we will not like to say too much as the matter is already in court, recent reports that the crisis was borne out of 2023 ambitions underscore the desperation on the part of some members of the political class.

“At a time like this, Lagos State APC wants to identify with the majority of the noble, decent and honourable men who have pleaded for peace, decorum and discipline to reign supreme in our party. The gladiators should take a cue from history that’s replete with men who tried to play God but failed at the crucial moment.

“We dare say that no one is bigger than the party that has provided a platform and a voice for the gladiators to be relevant.

“However, we regard this as testing the waters for the ultimate strategy of the enemies within to decimate the party before their final onslaught.

“We’re strengthened by the resolve of men of goodwill who’re standing firm in support of one united and indivisible party.

“We wish to call on the gladiators to shield their swords and deploy their strength to deliver on the various assignments entrusted to them.

“As much as we regard this development as a storm in the teacup, we’re of the opinion that our party will emerge stronger at the end of the day,” the statement read.

APC Hits Back Hard At Oyedepo, Wants His Head Examined