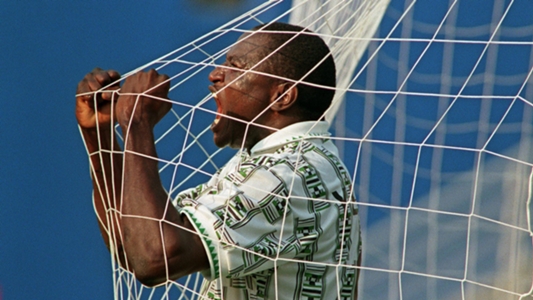 Mohammed made the remark during an interview with the News Agency of Nigeria (NAN), while reacting to speculations that his former client’s mother had been abandoned and left to suffer.

Mohammed stressed that Mrs Sikiratu Yekini had caused a lot of confusion to the public about her true condition and state of health.

“As a very close friend of the family, I am not aware of any form of hardship or misfortune which Yekini’s mother is undergoing.

“Long before his demise, my friend, Yekini had made solid preparation for his mother’s care.

“He built a two-story apartment containing five flats which were rented out to people and the mother collects the money directly.

“In addition, a warehouse where provision of all sorts was stocked for sale was constructed for her.

“Besides, two shops were built by the house for her to sell her provisions.

“Also, governments of Oyo and Osun States made huge monetary donations to her when Yekini just died.

“Furthermore, philanthropists like former Kwara State governor, Mr. Bukola Saraki, gave her an undisclosed amount of money, just like many journalists raised money for her living.

“In fact, an arrangement was made for her to appear on a TV programme: Who wants To Be a Millionaire, where a huge sum of money was given to her,” Mohammed said.

However, the lawyer pointed out that he did not know the motive behind the old woman’s attitude.

Also, a veteran sports journalist in Ibadan, Ayo Ademokoya, stated that he had worked with many people to ensure that Yekini’s mother was well catered for.

Ademokoya also alleged that she had connived with some people to help her feign as if she had been abandoned so as to get public sympathy.

NAN reports that the Minister of Youths and Sports, Mr Sunday Akindare, as well as the Nigeria Football Federation (NFF), recently announced that a total monthly allowance of N40,000 would each be paid to the mothers of two deceased football stars.

While the ministry pledged N10,000, NFF also promised N30,000 as monthly upkeep allowances each for Yekini and Samuel Okwaraji’s mothers.