How Atiku Plotted With Ekwueme Against My Second Term - Obasanjo

Jonathan Hit At God When He Fought Me - Amaechi

Buhari: From Virtual To Isolated Presidency 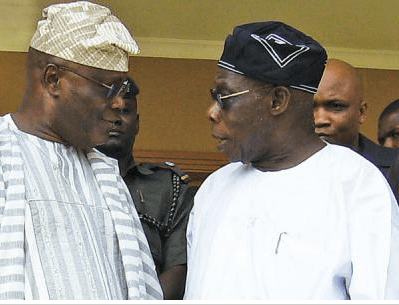 Dr. Olusegun Obasanjo has opened up the old wounds between him and his erstwhile deputy, Atiku Abubakar in the days leading to his 2003 re-election saying that Atiku plotted with Dr. Alex Ekwueme to deny him a second term ticket.

President Obasanjo spoke as he also rebuked former Governor Adebayo Alao-Akala of duplicity and of contributing to the Southwest’s loss of the office of Speaker of the House of Representatives in 2011.

Making corrections in the book on the plot against him by Atiku and Ekwueme, Dr. Obasanjo said:

“Again, Atiku did not back down as you claimed until Alex Ekwueme was defeated at the primary of PDP in 2003 as Atiku’s agreement with Ekwueme was to be Ekwueme’s running mate and Ekwueme, as President, spending three years and resigning for Atiku to complete the fourth year and then for Atiku to contest election in his own right in 2007.

“It was after the result of the primary that Atiku backed down, if you put it that way, it was when there was no other choice.”

Noting Alao-Akala’s role in the loss of Speaker of the House of Representatives by the Southwest, he said that the former Oyo State governor after proposing Ajibola Muraina for the position, that Alao-Akala turned back to project his Ogbomoso kinswoman, Mulikat Akande for the same position.

“Bayo, I will not say much on the issue of Muraina and Mulikat for Speaker of House of Representatives as reported on page 391 as you put it, ‘I sinned against this man once and that has marred our fantastic relationship’.

“I got a copy of that letter as Chair of BOT of PDP. It was unbelievable for me to hear that you later surreptitiously started prompting Mulikat, a lady from Ogbomoso, and you had started working behind the scene for her without coming back to tell me what had changed and why, nor go back to the South-West caucus. That, to me, is duplicity and I don’t play such a game.

“Alhaji Tajudeen Oladipo told me later the game that was played and in the end, you and the South-West were the losers. But you have apologised and I have forgiven and, of course, I am here. That too has also passed into history.”

Present at the book launch were Governor Kayode Fayemi of Ekiti State; Governor Seyi Makinde who was represented by his deputy, Rauf Olaniyan; the Alaafin of Oyo, Oba Lamidi Adeyemi; the Olubadan of Ibadan, Oba Saliu Adetunji, the Soun of Ogbomoso, Oladunni Oyewumi; the Minister for Youth and Sports Development; Mr Sunday Dare among others.