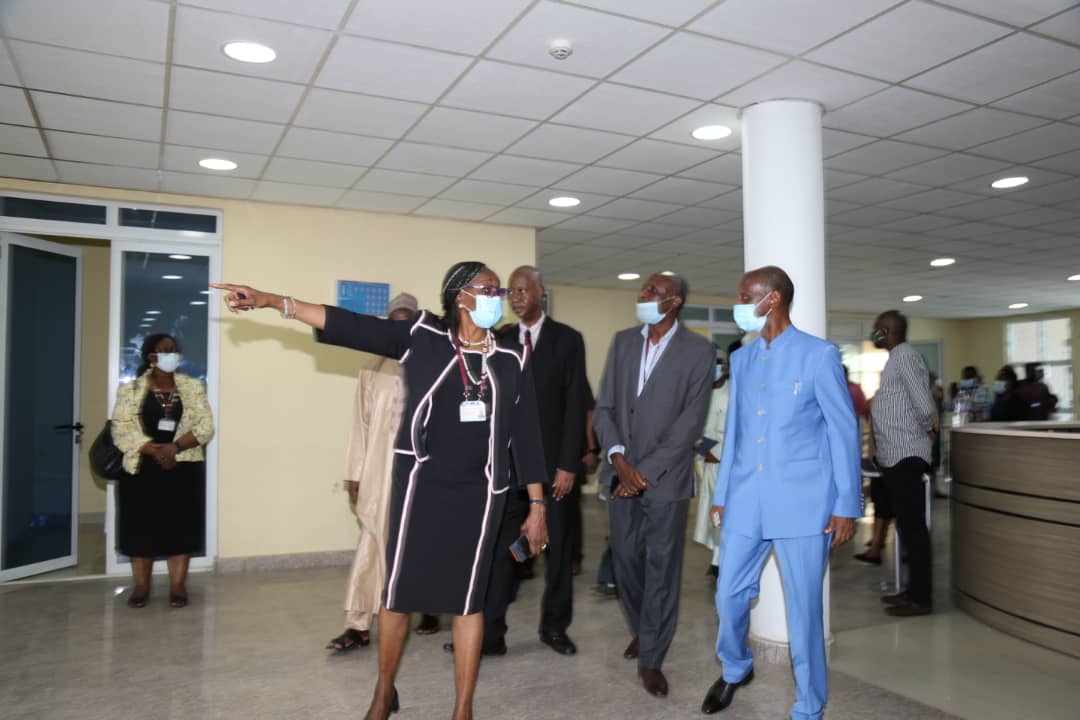 It was about one of the most touching moments of the three-day trip of the board of the Tertiary Education Trust Fund, TETfund last Tuesday at the Lagos State University, LASU.

Ibrahim-Imam’s only regret that day was the absence of the executive secretary of the commission, Prof. Suleiman Bogoro who had to rush back to Abuja the day before for some other official assignment.

Ibrahim-Imam’s regret on the absence of Bogoro had to do with the executive secretary’s passion for research in Nigeria’s higher institutions which he said was bearing fruit in LASU.

Faculty members had following the welcome address by the LASU vice-chancellor, Prof. Olanrewaju Fagbohun spoken out on how they had been assisted by TETfund in various research activities bringing broad smiles to Ibrahim-Imam and other board members in his delegation.

Perhaps nothing excited Ibrahim-Imam more than the evidence of LASU being in session at a time when nearly all universities in the country were shut down on account of the faceoff between the Federal Government and the Academic Staff Union of Universities, ASUU.

As the vice-chancellor and faculty members present at the interactive session with the visiting TETfund delegation bragged, LASU has not had any reason to shut down since 2016.

Evidence of that was the fact that lectures were going on during the visit.

What was the reason? Prof. Fagbohun said it had to do with the support from TETfund.

“From 2016 till date, we have not had any challenge in LASU and this is largely because of the support we have gotten from TETfund,” the vice-chancellor said.

He said the support from the fund quietened anxiety among lecturers and students largely because of the support given towards academic research and provision of infrastructure.

“Many of our colleagues were before not able to go for conferences because of lack of funds,” he said as he added that TETfund has severally been able to address those needs leading to satisfaction among staff and students.

The vice-chancellor also credited TETfund in achieving the feat that all 70 programmes offered by the university have been accredited.

The claims of the vice-chancellor were subsequently endorsed by some of the university’s professors and students’ union officials.

Professor Banji Fajayomi, one of the beneficiaries of the TETfund research grant in his contribution said that his experience with TETfund under the Prof. Bogoro led management had really changed the narrative for him concerning academic research.

According to him, the idea that you must know someone to push your application was shockingly absent in his dealings with TETfund.

“Yes, I have gotten grants before, but this is the best I have ever gotten,” Prof. Fajayomi said.

Even more, through TETfund the university has established a Centre for Entrepreneurship Development. As some officials of the students’ union testified, the centre has made it possible that they add entrepreneurship to their academic endeavours while in the university.

Among the 70 skill programmes the students are made to learn during the entrepreneurship development programmes are laundry, photography and such.

As Kuku Isaiah, the general secretary of the Students’ Union said, “the entrepreneurship development studies is added as a benefit to us as it goes side by side with our academic programmes.” Mr. Isaiah said he was himself undertaking the laundry skill said.

An estimated 3,000 students are presently engaged in the skill acquisition programmes.

As the vice-chancellor said, the purpose of the programme is to make the students immediately skillful in entrepreneurship once they graduate irrespective of the course of study.

Another project that Prof. Fagbohun was also willing to show off was the African Centre for Excellence which according to him got to its feet through the support of TETfund.

The centre which is a capacity building for leaders across Africa according to the vice-chancellor was open throughout the COVID-19 lockdown because of the foresight of upgrading the virtual platforms of the centre before the outbreak of the pandemic.

Following the reception and session in the vice-chancellor’s office, the delegation proceeded to the Senate building where Alhaji Ibrahim-Imam and the board interacted virtually with the provosts of the College of Medicine at the Ikeja and the College of Agriculture in Epe.

The impact of TETfund in LASU the vice-chancellor claimed had reflected in the emergence of the university as Nigeria’s number two university according to the Times Literary Series, TLS.

The day earlier, that is on Monday, the delegation had visited the University of Lagos which was like a coming home for the chairman of TETfund, Ibrahim-Imam who regaled the audiences at an interactive session of his relationship with the acting vice-chancellor, Prof. Folashade Ogunsola.

It was later as he kept on referring to the vice-chancellor as his sister, it was later that faculty and staff present at the interactive session when the cosmopolitan chairman informed that wherever he was that every December 25 that he always found his way to the Bodija, Ibadan residence of Prof. Akin Mabogunje for the Christmas festivity.

Prof. Mabogunje is the father of the acting vice-chancellor, Prof. Ogunsola.

Whether by that or whatever, TETfund according to Ibrahim-Imam had resolved to choose the University of Lagos as one of its centers of excellence in the country.

As part of the fund’s agenda to create a better environment for the students, Ibrahim-Imam announced that the fund would be increasing the bed spaces in the university by 2,000. The project he said would be undertaken in conjunction with the private sector.

TETfund according to Ibrahim-Imam will also provide at least N1 billion for the development of the Urology and Kidney Centre in the institution.

Taking into consideration the present realities as brought by the onset of the COVID-19 pandemic, Ibrahim-Imam also disclosed the readiness of TETfund to boost online learning.

“TETfund will collaborate with the universities and make the necessary investment to enhance e-learning in Nigerian universities.”

Ibrahim-Imam, the executive secretary, Prof Bogoro and the board members of the agency had earlier been welcomed by the acting vice-chancellor of the University of Lagos, Prof. Folashade Ogunsola who while commending TETfund for its several interventions into the school asked for more support.

The vice-chancellor observed that there were as many as 75 TETfund projects in the school spread in the main campus and also in the College of Medicine, Idi-Araba.

Prof. Ogunsola was to draw the attention of the visiting TETfund delegation to the reason why the University of Lagos seemed to be preoccupied with high rise structures. She said it was because of the relatively small size of the institution which is located in the heart of Lagos.

The TETfund delegation visited several of the projects. Unarguably, the most fascinating for them was the Entrepreneurship and Skills Development Centre, where they were conducted round by the acting director, Prof. Sunday Adebisi.

The centre according to Adebisi helps to empower students of the university with skills in entrepreneurship and also in crafts photography among others.

Summing up his assessment of the visit to the university, Ibrahim-Imam said:

”We have come, we have seen, and shall I say we conquered? This is because as I said, in Unilag alone, there are 75 projects that are ongoing, we have inspected several today and I must state that we are extremely impressed by the quality of work done here.

”We are also convinced that we are actually getting value for money, so this makes me particularly happy and going forward, we will continue to insist that we should even get greater value for the monies that we are investing.

”We have also identified very critical areas of needs, we have listened to the university management, the faculty members and the students, to assertain their needs, but we also came prepared with our own programmes,” he said.

While noting the vice-chancellor’s passion for the Iconic Building for the College of Medical Sciences, he said:

On the visit of her brother and his team, Prof. Ogunsola said:

”We are very excited about this visit by the TETFund as it will offer them ample opportunity to see things for themselves.

”We are happy that they came to see all of their intervention projects and we are  particularly gratified that they have added value to all that has been given us.

”Of course, they also saw how judiciously we utilised funds made available for the various  intervention projects in our university,” Ogunsola said.