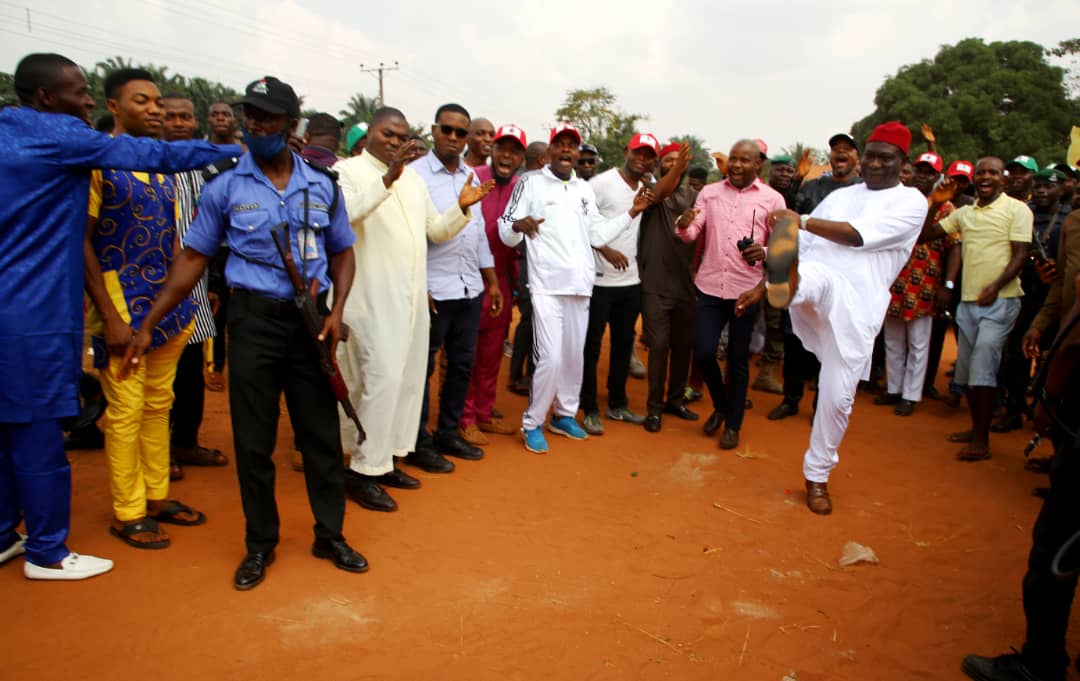 It was fanfare last Sunday when youth and community leaders of Ovoko, a community in Enugu North Senatorial District pledged solidarity with Senator Ike Ekweremadu, former Deputy President of the Senate.

The occasion was a local football tournament where Senator Ekweremadu, was also honoured with taking the kick-off for the grand finale of the Ovoko Football League.

Community leaders took turns to commend Ekweremadu for being a Senator for every part of Enugu State, describing him as a “cowpea that knows no boundary”.

A community leader and patron of the Ovoko Football Association, Chief Celestine Okanya, who also spoke on behalf of the community described the lawmaker’s politics as “a people and development-oriented brand”.

Addressing the crowd of supporters, which gathered to receive him, Ekweremadu pledged to execute development projects in the community and also support their youth to actualise their sporting talents.

He said: “I came to Ovoko to build a partnership that works with the young people. I have been part and parcel of your aspiration. At this stage, I consider myself a Senator representing every part of Enugu State, hence our projects cut across. I have attracted several projects around Enugu North Senatorial District.

I have attracted several road projects like the one at Ikwuoka-Amagu-Obimo road, Iheaka road, I have given transformers, I have done water projects, I have given scholarships on annual basis, and we are determined to do even more.

“In Enugu West where I come from, we introduced the Enugu West Water for All Programme and acquired a rig for that. We have done over 50 boreholes with the full accessories and water storage facilities, lately.

“So, in 2021/2022, we are going to devote our rig to Nsukka zone, starting from Ovoko. Our aspiration is to change the story of our people so that it will be better for all of us”.

While commending the youth of the community for resolve, he added: “I heard it on my way here that some people were minded to disrupt your programme, but I said it was the more reason we must come to stand in solidarity with you because Enugu is our home. But as you can see, the forces of darkness are too few and disappeared into the thin air because no one can stop an idea whose time has come. Your football tournament has come to stay and we will continue to encourage you the best we can.

“Because of the much love you showed me for the few hours that I have been here, I see myself as an Ovoko man from today.

“We believe that through this tournament, we will discover great footballers, who will make us proud. So, we will support the Ovoko Football Association with the sum of N1 million. I heard that they removed your goalposts. Therefore, I will also ensure that new goal posts are installed immediately so you can continue with your football activities throughout the year”, he added.