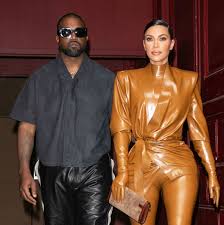 According to PageSix, the TV reality star, Kim and Kayne is about to file for divorce from Kanye West who she married in May 2014.

“He knows that she’s done. She has had enough, and she told him that she wants some space to figure out her future,” it quoted a source as saying.

The source also disclosed that West is anticipating the filing but doesn’t know when it will take place.

“He’s okay. He’s sad, but okay. He knows the inevitable will happen, and he knows that it’s coming soon,” the source added.

According to E! NEWS, Kim wants to file for divorce and also wants to do things right for their four children.

“It’s gotten to the point where they haven’t spent time together as a married couple in months,” the source said.

“They’ve seen each other for the sake of the kids but have been living separately. Kim knows the marriage is over. She’s known for a while,” the report alleged on Kim and Kayne divorce rumours.

GWG writes that this development is coming after West had stated that he had been trying to divorce Kim in a Twitter rant that he later deleted.

Many social media followers have since taken to the micro-blogging platform to express their views concerning the situation.

GWG brings some of the reactions to the Kim and Kayne divorce rumours.