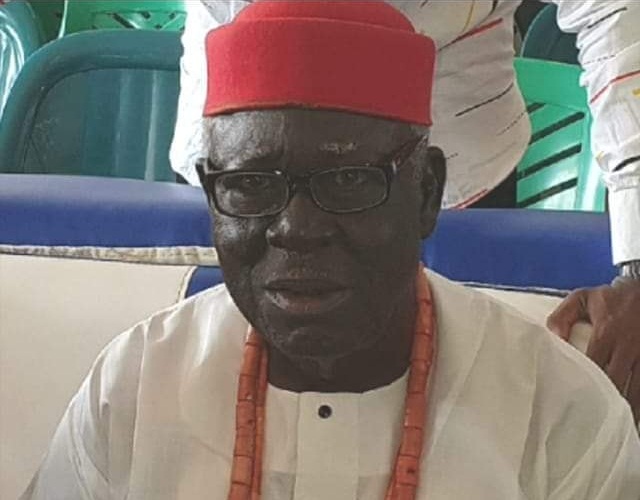 Gov. Godwin Obaseki of Edo on Tuesday described the late Pa Arthur Okowa, father of Gov. Ifeanyi Okowa of Delta, as a man of destiny who lived a fulfilled life.

Obaseki stated this while commiserating with the family of his Delta counterpart, the government and people of the state, over the death of the patriarch of the Okowa family.

He also commiserated with the state government and the  family of the Majority Leader of the Delta House of Assembly, Mr Tim Owhefere.

The Edo governor led a delegation from his state, which included his deputy, Mr Philip Shaibu, on the condolence visit at the Government House, Asaba.

He stated that Pa Okowa lived a worthy life which culminated in his son becoming a governor.

“We are here to condole with our friend and brother, Dr Ifeanyi Okowa, on the passing of his beloved father and the Majority Leader of the State House of Assembly.

“We are here to let you know that we share in your loss. I know that you have a very close and fond relations with your father.

“Having lived for 88 years and saw you become governor, why shouldn’t we thank God for his life.

Also, a delegation of Ijaw leaders led by the Delta Deputy Governor,  Kingsley Otuaro, paid a condolence to Gov. Okowa.

Otuaro said the delegation was representative of the larger Ijaw nation and was in the Government House to condole with the governor and the family on the demise of his father.

He added that the group was also there to condole with the governor over the late member of the State House Assembly, who was its Majority Leader, Mr Tim Owhefere.

“We are not unaware of the fact that parents and children are the greatest asset to a man and when they pass away, no matter their age, it is always excruciating and that is why we are here to condole with you and the family.

“We are convinced that papa left a great legacy. He exemplified love, service, fairness, equity and justice in all his dealings,” Otuaro said.

He assured the governor of the support of the Ijaw nation during the funeral period.

The Speaker of the State House of Assembly, Chief Sheriff Oborevwori, who was in company with his Edo counterpart, Mr Marcus Onobun ,and principal officers of both Houses of Assembly of both states, also visited the governor.

In his remarks, Oborevwori said, “We are here to pay a condolence visit to you with our counterpart from Edo State.

“We know how you feel in this mourning period. Papa has gone and no matter the age, his death is still painful but we are joyful that he left a legacy as a father to many.

“Papa has played his role on earth by bringing you and your siblings up and on this note, we ask that you accept our profound condolences”.

Managing Director of the commission, Chief Askia Ogieh, who spoke on behalf of the delegation, said that Pa Okowa’s death was not a loss to the family alone, but to humanity in general.

This, according to him, is because of the positive impact he made in his 88 years sojourn on earth.

Responding, Gov. Okowa thanked Obaseki, his delegation and others for the visit and said that his family was encouraged by the visit of numerous friends and well wishers, including sitting and former governors.

“Your visit today has lightened our pain, our daddy lived long but we would have wished that he lived longer.

“Obviously, we would not have wanted him (Pa. Okowa) to leave at this time but there is no time that any man would like to die. It is God who decides the time to call anyone.

“Our father contributed immensely to the development of the state as a teacher where he taught many people,” he said.

He noted that as a politician, the advice the father gave to him had always been useful in his political career.

On the late Owhefere, Okowa described his death as very painful, saying he was full of life and that it was so unfortunate that he had to leave so early.

Okowa remarked that the lawmaker died a few hours before his father, (Pa. Okowa), describing it was an unfortunate incident.

“He (Owhefere) is somebody we must all continue to miss because of the relationship he kept with all,” Okowa stated.