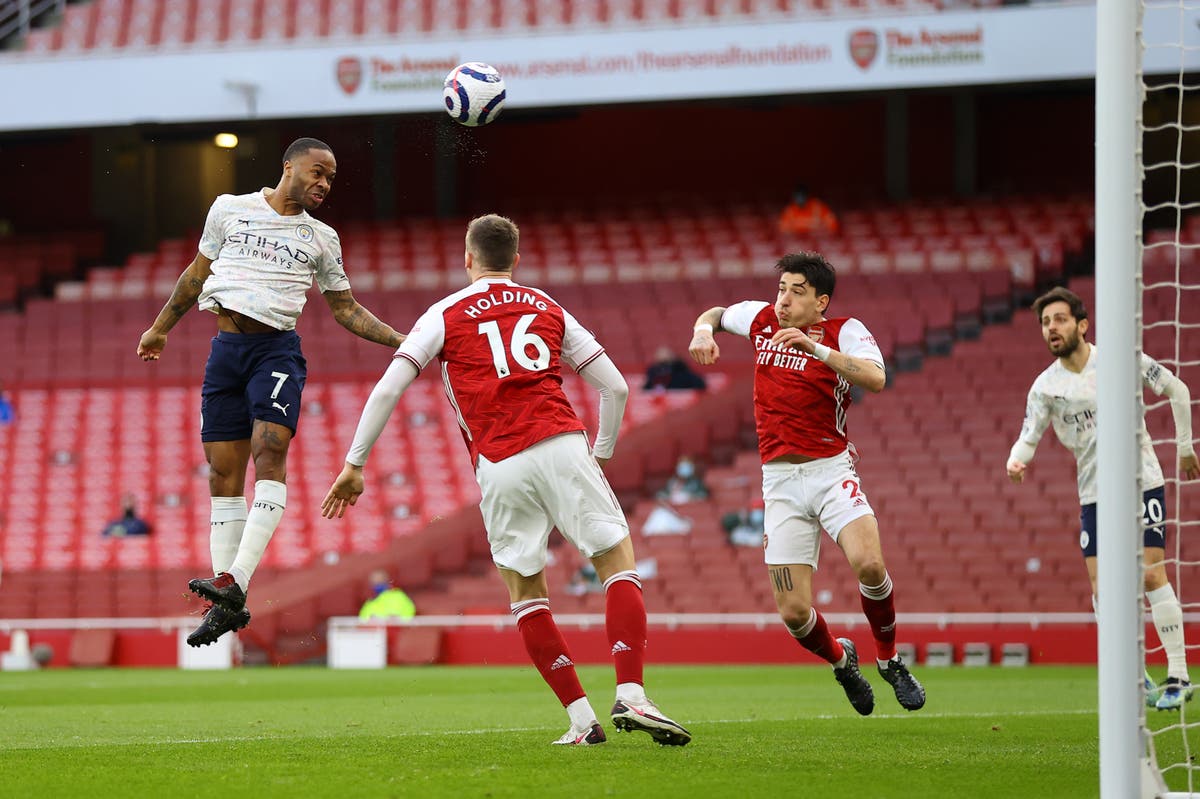 A 10-point lead at the top of the 2020/2021 English Premier League (EPL) opened on Sunday after Manchester City’s defeat of Arsenal at the Emirates Stadium. The host lost by one goal.

The win helped them to extend their record winning streak to 18 matches.

Raheem Sterling headed Manchester City in front to maintain their advantage over Manchester United and Leicester City, who both recorded victories.

West Ham are fourth after a 2-1 London derby win over Tottenham Hotspur, who remain ninth.

Sterling gave Manchester City the lead after just two minutes when he headed Riyad Mahrez’s cross home, and although Arsenal improved, they could not find the equaliser.

“We knew today would be one of the toughest ones but we scored early and we could control it,” Manchester City manager Pep Guardiola said.

“It is a struggle, a fight, behind the ball and that is why we like this result.”

James Maddison and Harvey Barnes scored the goals as Brendan Rodgers’ side kept their UEFA Champions League qualification hopes alive. However, City’s defeat of Arsenal has blurred the outlook for the Gunners.

Bertrand Traore pulled one back for Aston Villa early in the second half, but Leicester City held on for the 2-1 win to leave Aston Villa eighth.

“There’s a greater calmness,” Leicester City manager Brendan Rodgers said of his side.

“We’re playing some great football, but at times you have to dig in and have spirit, and we are able to do that.”

West Ham moved into the top four after they beat London rivals Tottenham 2-1 in the day’s early match. After City’s defeat of Arsenal that further complicated the situation of the London clubs in the title race.

Michail Antonio put West Ham ahead after five minutes and Jesse Lingard added a second two minutes into the second half.

Lucas Moura pulled one back but though Gareth Bale and Son Heung Min hit the woodwork, West Ham held on to go fourth, while Spurs remain ninth.

“It is a great result for us,” West Ham manager David Moyes said.

“Today we felt it was a big, big task. Tottenham are one of the top sides and have fantastic players. For us to get a result and keep our momentum going is really good.

Antonio capitalised on a mistake by Hugo Lloris to put West Ham in front and Lingard’s goal was allowed to stand after a consultation with video assistant referee over offside.

Tottenham brought on Bale at half-time and the Wales forward had an impact, sending in the corner-kick for Moura’s goal and then smashing the crossbar late on.

Spurs manager Jose Mourinho rued his side’s defensive errors but said things were not as bad as they seemed.

“I wouldn’t say crisis,” he said after their fifth defeat in six Premier League matches.

“I would say a bad, a really bad, run of results. That is obvious. We’re losing too many matches.”