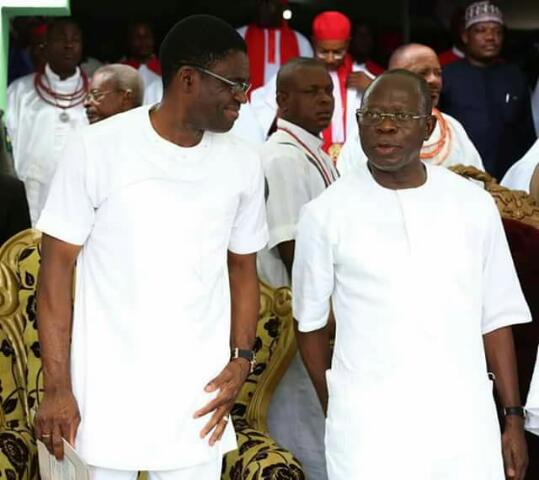 Comrade Philip Shaibu on Sunday said that his erstwhile political mentor, Comrade Adams Oshiomhole fell by the roadside after he backtracked on his initial goal of making poverty history in Edo State.

Explaining the origin of his battle with Oshiomhole, Shaibu said that Oshiomhole initially took on the struggle to remove the influence of godfathers in the state and create an egalitarian society. He, however, said that the comrade governor turned himself into a godfather and along the way also reversed in his philosophy of eradicating poverty.

Shaibu spoke in Benin at a reception by the immediate past local government chairmen in the state following a Thanksgiving service at at St. Paul Catholic Church.

“We said there must be a change and that godfathers must be brought to their knees and people must decide who lead them while leaders must be accountable to the people and not few godfathers,” Shaibu said.

“But, along the line people that didn’t believe in it fell by the road just like the way Oshiomhole fell by the roadside because he didn’t actually believe that we should make poverty history in Edo.

“Even the commissioners, SSAS and some local government chairmen that resigned from our cabinet didn’t believe in the cause, because if they did, the fight then was needles,” the deputy governor said in reference to the resignations that trailed the Obaseki government ahead of last September’s governorship poll.

Noting that the fight in Edo was between those who believed in the war against poverty and those who wanted to entrench poverty, he said:

“for me people said I am loyal to Obaseki, but I am  loyal to a cause I believe in.

“I was brutalised, injured and had my knee and everything  replaced under Oshiomhole’s administration, all this was that some godfathers wanted to derail our making poverty history in Edo.

“So we fought on the side of the people and the beneficiary of that struggle was Oshiomhole,”.

Affirming that he would always be on the side of the anti-poverty crusade, Shaibu said “I will be in the forefront of that fight.”

He also appreciated the local government chairmen who he said rejected millions of naira and SUVs to betray Governor Godwin Obaseki.

Mr. Jekins Osunde, the chairman of the Association of Local Government in Nigeria, ALGON, Edo state chapter, had earlier commended the state administration for the free hand given the local government chairmen in running their councils as he said that they delivered on their electoral promises.

How PDP Took Everything In Delta Councils Poll – DSIEC