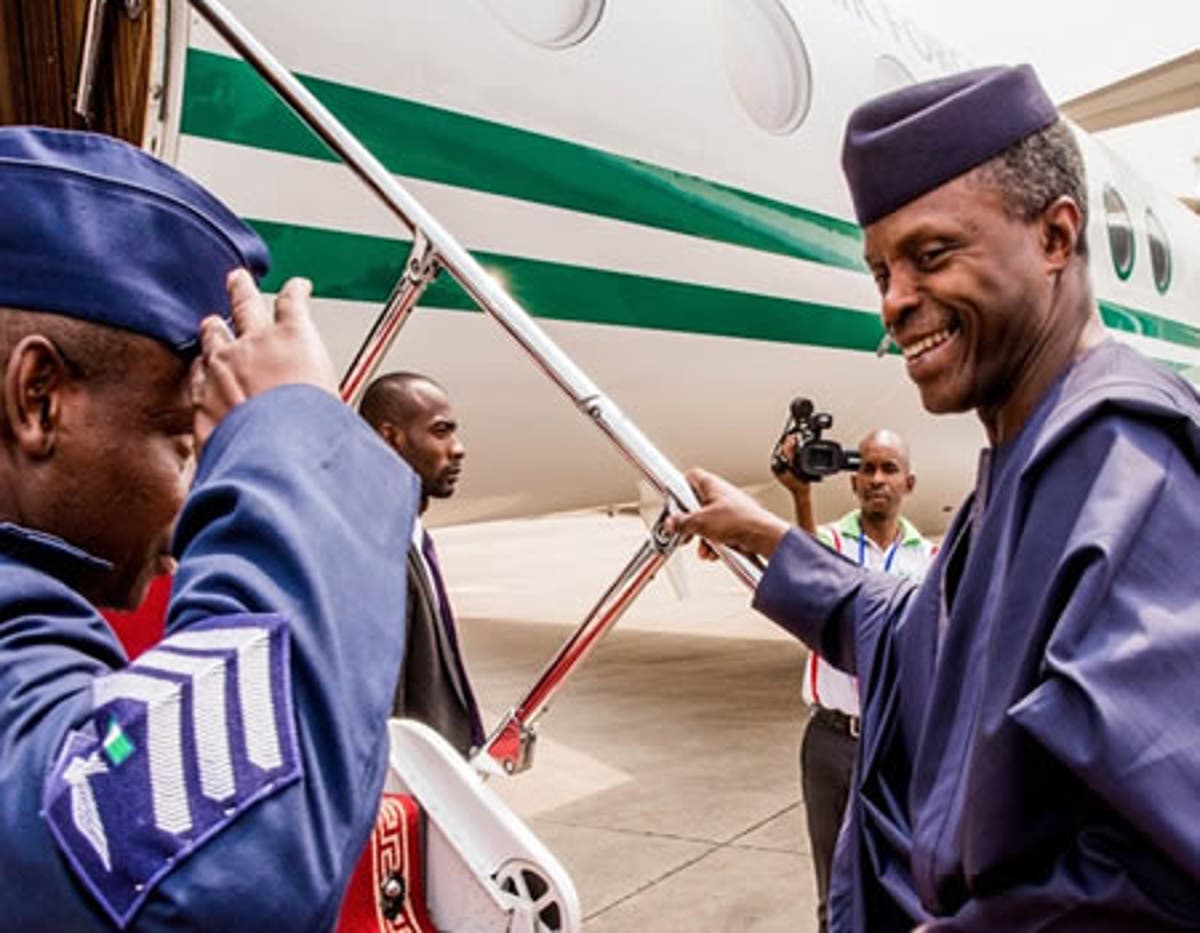 Even in a normal day, Yemi Osinbajo’s schedule is quite frenzied. He is not your typical sedate Vice President. But in the two weeks that the President has been away on medical vacation, the VP’s workload has understandably increased many times over.

The sheer intensity and rigor of his work and the breath of issues he covered within the period speak to his capacity and mental energy.

In the days of Abba Kyari, especially, many Nigerians liked to talk of how sidelined and relegated to the background he was, but nobody has ever doubted his capacity to deliver on assigned tasks and responsibilities.

In these troubled times, the nation requires a leader of great vigor to meet the moment.  In a little over a week, the VP traversed the nation, moving across the length and breadth of the land, covering a wide spectrum of issues ranging from managing Micro Small Medium Enterprises (MSME) to herdsmen killings. He visited Gombe and Ebonyi States where he made three stops and Imo (four stops).

Last Thursday, he attended the First Lady’s book launch in the morning and in the afternoon; he dashed into Lagos for another book event organized by former journalists of The Guardian newspaper to honour their late publisher. The following day he was in Jigawa promoting a clean energy programme.

The flurry of events began on Tuesday, March 30, the very day the President left. The VP went to Gombe to attend the 27th edition of MSME Clinic – a federal government platform where the regulatory authorities, such as NAFDAC, Standard Organisation of Nigeria, Corporate Affairs Commission and other regulatory bodies are brought together under one roof to meet some micro, small and medium businesses.

These categories of businesses employ over 60% of Nigeria’s working population, but they are vulnerable to a wide range of challenges. They include tailors (fashion designers), carpenters (furniture makers), and all sorts of mom and pop enterprises. I recall that the VP had attended a similar clinic in Calabar in 2017 where a friend who makes toothpicks from bamboo was a star attraction. By bringing the regulators and operators under one roof, the Clinic hopes to solve some problems at a one-stop platform.

At the Gombe Clinic, Prof Osinbajo was concerned with how the federal government could help the MSMEs to lower the costs of doing business.  ‘‘Perhaps we can look at the possibility of Shared Facilities for some aspects of the agro-processing value chain that you are already doing.

The national MSME clinics program has facilitated the establishment of Shared Facilities for MSMEs in Benue, Bauchi, and Oyo State, with others to be established in Kaduna, Kebbi, Anambra, Ogun, Ebonyi, Edo, and Katsina State over the next year’’, he announced.

These Shared Facilities will provide fully equipped cluster style spaces that MSMEs can use at a reasonable cost, thus sparing them the financial burden of having to buy their own equipment.

Where possible, these Shared Facilities will be pre-certified by the relevant regulatory agencies. A good example is the 200,000 capacity yam storage facility for micro small and medium enterprises in Benue State at the Zaki Biam International yam market.

The storage facility is designed to address the problem of post-harvest losses, which is one of the greatest impediments to actualizing the immense potential of the agricultural sector. Nigeria produces 17 million tons of yams annually but loses almost 40% of this yield due to the lack of storage.

In Ebonyi State four days after, the mood was far more somber and dismal. Eighteen people, including a priest, had been killed by herdsmen in cold blood. The President had asked the VP to visit the communities and condole with the heartbroken Governor David Umahi and the citizens. The VP, who has already assumed the role of the chief comforter of the federation, visited four communities and held a Town Hall meeting in Abakaliki.

He condemned the horrific killings, condoled with the government and people of Ebonyi and asked the law enforcement authorities to investigate the crimes and bring justice to the victims and the criminals. In addition, the VP asked for the Ministry of Humanitarian Affairs to send help to the displaced communities. But despite the noble efforts of Yemi Osinbajo, the tragedy of the Nigerian nation is the absence of rule of law. How could these killer herdsmen be walking around free after committing these heinous crimes?

How come no single herder has ever been brought to face the law? It is the shame of a nation that no killer herdsman has been prosecuted since the President was elected in 2015. And if there has been any, it means that it has not been well communicated to us. My heart bleeds for all the aggrieved communities who have fallen victims to coldblooded murderers.

On April 6, two days after the solemn event in Ebonyi, the VP returned to the South East to commission roads and some infrastructure projects built by the Hope Uzodimma administration. Gov Uzodimma had just celebrated his first anniversary in office and had pulled out all stops to impress the august visitor. But a day before the VP arrived – in the early morning – terrorists assaulted the prison and police headquarters in Owerri, and made attempt to breach the Government House nearby.

The VP’s schedule had to be modified to include assessment tours of the torched facilities. Prof Osinbajo praised the governor for the huge infrastructural developments in the state, noting that the investments ‘‘align with Mr. President’s own belief that the building of roads, rail, power, and digital technology, and other infrastructural assets, must be the first priority for economic development’’. The VP then turned to the attacks of the previous day and said that ‘‘an attack on the critical institutions of law enforcement, police stations and prisons, is an attack on the safety, security, and wellbeing of the citizens.

It is not merely an assault on law and order; it is a mindless attack on the people and the way of life of the people. When you attack police stations and free dangerous criminals, you put men, women, children, and their possessions and livelihoods at risk.

Whatever the motives of the perpetrators, their action is egregious and atrocious in the extreme and all men and women of goodwill must openly condemn this assault on the way of life of the good people of this State’’. At the heart of these mindless attacks is that the young people of Igboland believe that federal authorities are too hard on them (mostly member so of IPOB while killer herdsmen who go about molesting, raping and killing people are left untouched.

Next on Osinbajo’s diary was the launch of the First Lady’s book at the State House, Abuja and the launch of the book, The making of the Flagship – the story of The Guardian in Lagos. I have written extensively on the book launch event in Lagos.

The visit afforded Prof Osinbajo the opportunity to meet with the Emir of Kazaure, Alhaji Dr Najib Hussaini Adamu, who was his Law School classmate in 1979. If there was a personal reason for why this sleepy village was chosen to flag off the power scheme, its overall impacts cannot be ignored.

The Solar Power Homes project is a clean energy project of the Buhari administration in which five million homes across the country would be connected to off-grid electricity. It is an ambitious effort to ensure that every Nigerian has access to electricity.

To achieve this, the federal government is decentralizing power supply to include solar sources.

With the costs of solar installations falling, this is an opportune moment for the Rural Electrification Agency (REA) to electrify homes in the rural communities. The multiplier effects are enormous. The VP’s demanding schedule in the two weeks he held sway reveals his high-value work ethics and deep commitment to the vision of the President. He deserves our applause.