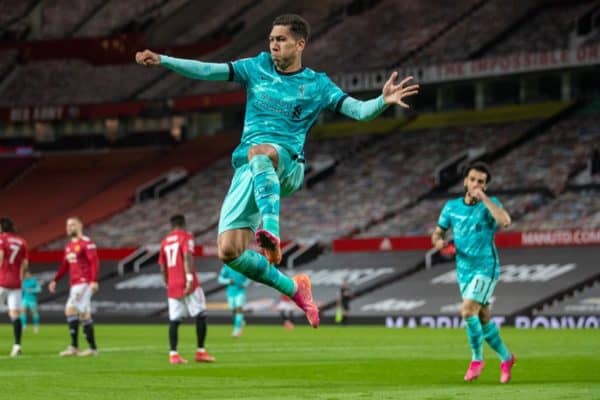 Jurgen Klopp boosted his coaching record late on Thursday after he led Liverpool to breathe more life into their Champions League qualification dreams after they cruised to a 4-2 victory over Manchester United at Old Trafford.

Manchester United, however, had the first laugh. As early as the 10th minute, Bruno Fernandes had fired the hosts ahead.

Manchester United were playing eye catching football after the lead until Diogo Jota equalized in the 34th minute.

Scoring the equalizer gave the visitors belief to turn the game around and they did that wonderfully well through Roberto Firmino’s bullet header on the stroke of half time.

After the break, Liverpool’s Klopp apparently with new instruction shell-shocked the Red Devils by responding wonderfully as the second half commenced at Old Trafford.

Firmino was galvanized by his first half heroics and got his second of the game within one minute after the restart to make it 3-1 in favor of Liverpool. Diogo Jota almost got a brace for himself just like his attacking partner, but his effort clattered the woodwork.

Marcus Rashford reduced the deficit to one goal as he slotted with authority in a one-on-one situation, before Mohammed Salah put the result beyond any reasonable doubt to give Jurgen Klopp his first victory at Old Trafford after seven attempts and pile more pressure on Chelsea and Leicester City above them on the standings.