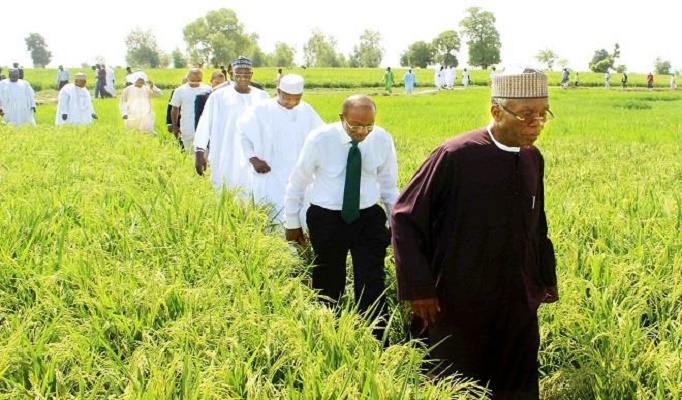 ADO-EKITI – The Governor, Central Bank of Nigeria (CBN), Mr. Godwin Emefiele, has faulted claims in certain quarters suggesting that the Bank’s targeted interventions in the agricultural sector are tilted in favour of a certain section of the country.

Mr. Emefiele made the clarification in Ado-Ekiti, Ekiti State, on Tuesday, May 18, 2021, while unveiling the 2020 wet season harvest aggregation and flag-off of the 2021 wet season input distribution in the South-West geo-political zone under the CBN-RIFAN Anchor Borrowers’ Programme.

According to him, contrary to views held by some individuals and interest groups, the Bank’s interventions in the Anchor Borrowers’ Programme (ABP) were not only about rice production but had expanded to over 21 crops and were evenly spread across the country.

Describing criticisms against the Bank’s effort at boosting agriculture in Nigeria as unfair, he disclosed that more than N300 billion had been disbursed to companies operating in the southern part of Nigeria, citing companies and farmers across Lagos, Edo, Ondo, Ogun, Osun, Ekiti, Bayelsa, Rivers, Cross River as major beneficiaries of the Bank’s interventions.

Meanwhile, Mr. Emefiele charged stakeholders in the various crop value chains in the Nigeria to continually make consistent and positive strides towards attaining food security, noting that attaining self-sufficiency in food production will not come cheap.

While acknowledging the current challenges in attaining food security in Nigeria, he said synergy among stakeholders will surely catalyse the growth process, assuring that the CBN stood ready to offer effective partnership to deliver on this critical national mandate of attaining self-sufficiency in food production.

According to him, the sustainability of Nigeria’s current efforts in agricultural production can only be guaranteed if youths are attracted into agriculture as they remain the future of the Country.

He therefore enjoined Nigerian youths to embrace agriculture, noting that the “They have the talent, energy, enthusiasm, technological adoption capacity and all the right drive to revolutionize agricultural production in Nigeria.

“We must meet them half-way to ensure that we provide the enabling environment to make agriculture attractive to them,” he noted, adding that “the Central Bank of Nigeria stands ready to support youths that are willing to engage in agriculture.”

The CBN Governor disclosed that a total of 3,107,890 farmers had been financed for the cultivation of 3,801,397 hectares across 21 commodities through 23 Participating

In their various remarks, the Governors of Ondo (Rotimi Akeredolu), Jigawa (Mohammed Badaru Abubakar) and Osun (Adegboyega Oyetola) stressed the need for greater attention to be given to agriculture import substitution, even as they commended the CBN Governor for his vision in putting the country first by supporting agriculture.