Okorocha Finding It Difficult To Live After Leaving Power - Uzodimma 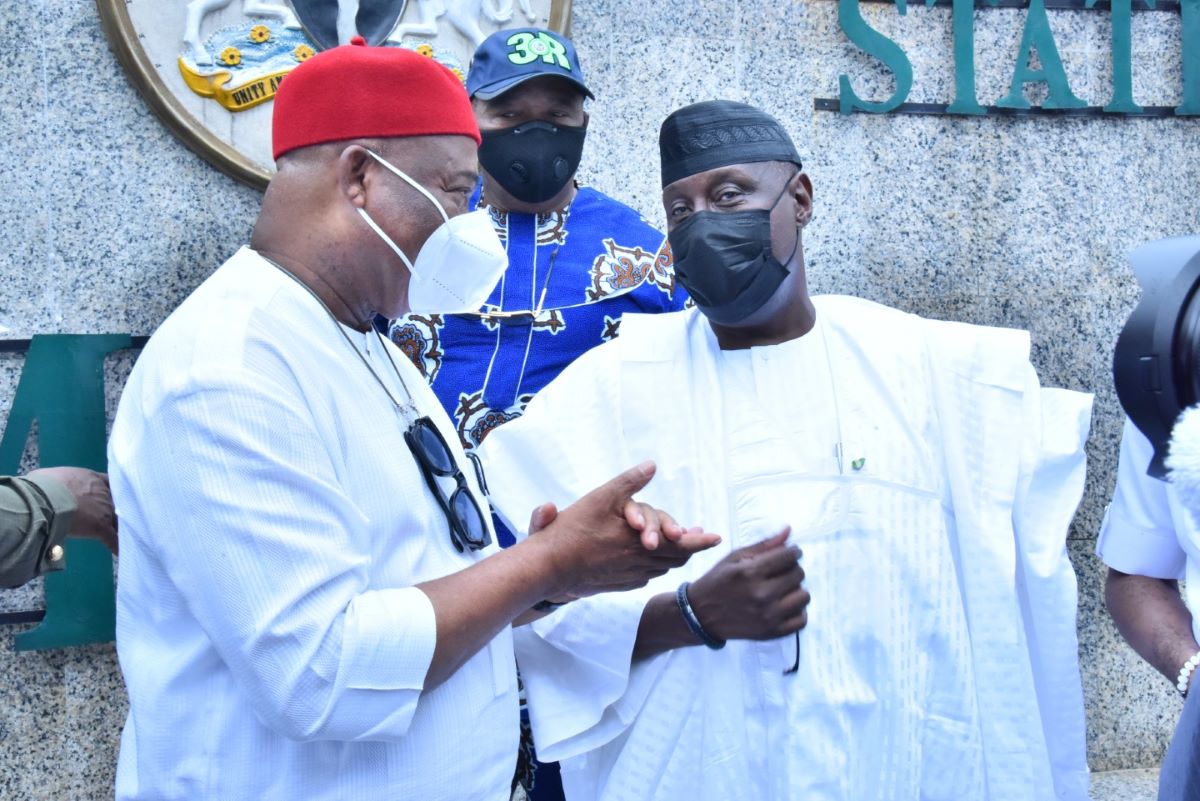 Rochas Okorocha is finding it difficult to manage life after leaving power, Governor Hope Uzodimma of Imo State said on Thursday as he regretted his predecessor’s resistance to partake in the registration exercise for All Progressives Congress, APC members.

Uzodimma who spoke while receiving the APC Registration and Revalidation Appeal Committee in his office in Owerri, noted that “the management of self aggrandizement, self esteem, and inability to reason that yesterday is gone and today is a new vista is the major problem of most past leaders who still think they can carry over the powers they held yesterday.”

Uzodimma particularly noted how he pledged to take Okorocha to register if he found it difficult but that the former governor threw away the gesture.

Addressing the Committee whose members hinted that former Governor of Imo State, Rochas Okorocha and Senator Ifeanyi Araraume complained that they and their supporters were bared from the recent registration and revalidation exercise, Governor Uzodimma informed that those who are complaining about the APC registration in the State are those who never drew near to get registered.

The Governor did not mince words to say that the monitoring Committee assigned to the National Registration Team was mandated to make sure that all members and even non-members of APC were registered in the exercise.

He restated his resolve to “uphold the APC manifesto to change things for the better for Imo people in particular and Nigeria in general,” saying in doing so he is “returning the power of APC to the people following the democratic process.”

Governor Uzodimma told the team led by Hon. Farouk Adamu Aliyu that his interest is the growth of the party in Imo State and beyond and not necessarily the interest of an individual or groups.

He demonstrated his team spirit by showing the team members of his cabinet who served as Commissioners in the Government of Senator Rochas Okorocha.

The governor regretted that some people find it difficult to manage life after power, noting that nothing will deter him from registering as many Imo people as would want to identify with the APC.

Governor Uzodimma pointed out that soon the Party Congresses will be held in the State for people to choose who they want to preside over their affairs and that “if nothing different is done it will be a Direct Congress because as the Governor of Imo State I was a beneficiary of that process.”

The governor reiterated that Imo State is APC and that there is no need for anyone to pretend about it.

Briefing the Governor on why they came to see him, the leader of the APC Registration and Revalidation Appeal Committee, Hon. Farouk Adamu Aliyu explained that they have come to critically look at the complaints and petitions of members who claimed that they were not captured, and or were prevented from registering during the Party’s National Registration exercise.

Besides the hint to Governor Uzodimma that Okorocha had petitioned, Aliyu said they were in Imo to ensure that no member or even non-member who is interested in joining APC through registration is disfranchised, noting that “as a family APC is ready to accommodate all that genuinely want to be a member of the Party.”

The visit was witnessed by the Deputy Governor of Imo State, Prof. Placid Njoku, the Speaker Imo State House of Assembly,  Rt. Hon. Paul Emeziem and his deputy, Amara Iwuanyanwu,  the Chairman of Imo State APC,  Prince Marcon Nlemigbo, members of his Executives and other APC dignitaries in Imo State.