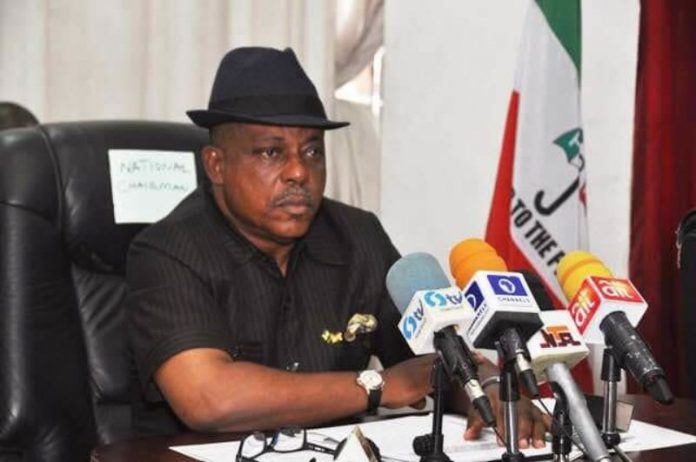 National chairman of the Peoples Democratic Party, PDP, Prince Uche Secondus was at the weekend under fire over the defection of Governor Ben Ayade to the All Progressives Congress, APC with a call on him to resign for depleting the party’s membership despite the alleged incompetence of the APC.

The call for Secondus to resign came from PDP chieftain, Prince Kassim Afegbua.

In a statement made available to  GreenWhiteGreen GWG, the party chieftain called on the governors and other stakeholders to nudge Secondus towards the exit door on the claim that he was leading the party towards irrelevance.

He asserted that two other governors were at the exit door saying that it was because of the failures of the Secondus leadership.

“I have reiterated the fact that the present leadership of the peoples’ Democratic Party,  PDP, under Prince Uche Secondus has outlived its usefulness and therefore deserves to be shown the exit door or voluntarily resign. I had predicted in the course of my interrogation of the leadership that Governors Ayade,  Mutawalle, and Ikpeazu would soon exit the party,  as well as Fani-Kayode and Senator Grace Bent,  simply because the Secondus leadership is bereft of ideas and lacks the capacity to lead a virile opposition.  Under his phlegmatic leadership,  the PDP has lost two serving Governors while others are in the queue to exit the party.  Uche Secondus is killing the party day by day because he does not have what it takes to pilot the affairs of the opposition.

“Right before our very eyes, we have lost two former Speakers, Dogara and Bankole,  former Governor Gbenga Daniel has left, David Umahi and Ben Ayade have both left, making the party vulnerable to the average Nigerian mind. The stakeholders of the party should move beyond mere meetings to push away Secondus as a way to re-ignite, reboot and rejig the party for more constructive engagements that would reposition the party ahead of the 2023 elections.

“The Governors Forum,  the Board of Trustees and the National Executive Committee must take a deliberate step to arrest the present drift of the party in the hands of a man who has no capacity to lead a 21st century opposition party like PDP.  The time to take action is now. Tomorrow may be too late.

“The present leadership of the PDP under Uche Secondus has made the party an endangered specie that is now vulnerable to so many frailties and fractures. An opposition party that should be gaining momentum in the face of the incompetent leadership of the country is painfully losing momentum with depleted membership on a regular basis. That is not cheering news at all.  The time to show Secondus and his co-travellers the exit door is now.  We need to act fast before the apocalypse.