South-East renunciation: What Next For Kanu, IPOB? 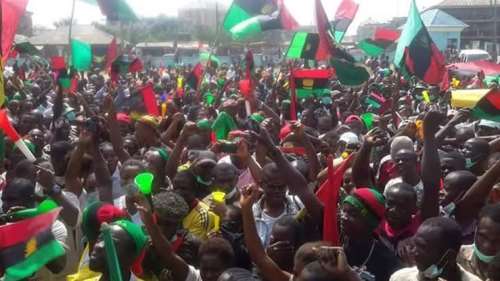 On June 19, 2021, leaders of the South-East, comprising governors, traditional rulers, religious leaders and politicians, rose from a meeting disown and renounce the Indigenous People of Biafra (IPOB).

The meeting in Enugu was the first time leaders of the geo-political zone unanimously washed their hands off IPOB and other pro-Biafra agitators, affirming that such groups did not speak for the region.

Recall that in September 2017, the Federal Government had declared the activities of IPOB as illegal and acts of terrorism.

The Terrorism (Prevention) (Proscription Order) Notice, 2017, proscribed the existence of IPOB and restrained individuals or groups of persons from participating in any activity relating to or involving IPOB.

The proscription order gave a stern warning against any involvement in the activities of the group, stating that violators would be prosecuted.

“Consequently, the General Public is hereby warned that any person or group of persons participating in any manner whatsoever in any form of activities involving or concerning the prosecution of the collective intensions or otherwise of the said group will be violating the provisions of the Terrorism (Prevention) Act, 2011 (as amended) and liable to prosecution.”

According to a 2020 report published by the Journal of Public and International Affairs, IPOB was an offshoot or splitter group of the Movement for the Actualisation of the Sovereign State of Biafra (MASSOB).

Nnamdi Kanu was the director of MASSOB’s London-based propaganda radio, Radio Biafra, who parted company with the group to form IPOB in 2014.

Justifying the proscription of IPOB, Minister of Information and Culture Lai Muhammed, said in 2018 that the federal government got intelligence that the group was “stockpiling weapons through funding from foreign countries”.

He also said Kanu was using divisive and inciting rhetoric and that the group “has lust for destruction”.

Indeed, Kanu, leader of IPOB, on several occasions, had been on record for his inflammatory comments about the Nigerian nation.

He also constantly and derogatorily refers to Nigeria as a “zoo”.

It was also Kanu who propagated the conspiracy theory that the person who currently occupies Aso Rock was not President Muhammadu Buhari, but a puppet cloned from one “Jubril of Sudan”.

Kanu, who was arrested on treason charges in October 2015, was arraigned and subsequently granted bail by a federal high court in Abuja in 2017.

In 2019, the court revoked Kanu’s bail and ordered his re-arrest, after his continued absence in court.

Even in Kanu’s absence, individuals and groups in the South-East and South-South of Nigeria continue to participate in activities under the auspices of IPOB.

For instance, following a clash between IPOB and security operatives in Obigbo, Rivers State, which led the killings of members of the group in 2020, Kanu issued a threat on Gov. Nyesom Wike.

“He will be hunted by legions, domestically and internationally. And it will be scorched-earth and fiery,” he said.

Most recently in May, Kanu in a broadcast, declared a compulsory sit-at-home in the South-East and warned that anybody caught violating the order would be killed.

“…Kanu and IPOB are fast descending into an anarchist organisation; something close to a terrorist group which the federal government branded them some years back.”

In spite of the proscription on IPOB, Kanu continues to insist – albeit from exile – that his cause for a sovereign state of Biafra is not a crime.

“They have not even defined the crime they said I have committed. There is no crime in Nigeria called secession.

“Secession is not a crime in Nigeria or anywhere in the world. Only armed rebellion is a crime, not self determination.

“We will continue to agitate; we continue to move forward because we are IPOB; we don’t relent and can never ever relent,” Kanu said in 2019.

However, it is argued that IPOB’s activities, such as carrying arms, clashing with the military, mounting roadblocks and extorting innocent citizens, pose threat to peaceful co-existence and national security.

Also, many have fingered the group as perpetrators of the recent coordinated attacks on security and correctional formations, as well as INEC’s offices across the South-East and South-South.

In his piece published in Leadership in April, Stanley Ebube wrote that IPOB could not be exonerated from those attacks.

“Although the group has not come out to claim responsibility, the Indigenous People of Biafra (IPOB) has been accused of carrying out at least some of these attacks.

“Of course, IPOB cannot be exonerated, especially when attacks such as the recent one on two soldiers and three policemen in Omagwa, Ikwerre Local Government Area of Rivers State, is added to the mix,” he wrote.

Former I-G of Police, Mohammed Adamu, also insisted that IPOB was behind some of the attacks and warned of “dire consequences” awaiting those involved.

Curiously, in December 2020, Kanu announced the establishment of Eastern Security Network (ESN), a paramilitary wing of IPOB, allegedly to protect the people of the South-East.

What purpose does an unconstitutional, non-state sanctioned paramilitary organisation serve in a democracy?

Former US ambassador to Nigeria, John Campbell, in his blog on Council on Foreign Relations, said the activities of IPOB’s ESN were capable of escalating violence.

“IPOB was saying that ESN forces were merely a “vigilante” group protecting the Igbo… Now Kanu has an organised wing and has the authority to order a cease-fire in a fight with the federal forces,” he said.

But how come Kanu has not been extradited from the UK, where he currently resides, to face prosecution? Is the UK reluctant to hand him over to the Nigerian government?

One account says Westminster has rejected the extradition of the IPOB leader because there was no bilateral treaty compelling it, and no guarantee that his rights would be protected.

Another account says the UK government had not received any formal extradition request from the Nigerian government and could oblige if such request is made.

In actual sense, The London Scheme was an agreement rather than a multilateral treaty introduced in 1966 with the aim of setting out a framework for the extradition of individuals between Commonwealth countries.

‘Extradition UK’, a free-to-use extradition service website, states that extradition is possible for offences punishable in both the requesting and requested states (the double criminality requirement) by imprisonment for two years or more.

This means, if the purported offence committed is punishable in Nigeria but not in the UK, extradition might be rejected.

Regardless, experts believe that if the Nigerian government has compelling evidence to demand Kanu’s extradition, it should explore diplomatic back channels to seek same from the UK government.

Whether or not Kanu is extradited to face trial, IPOB remains a proscribed group and, by law, its activities are illegal.

It is therefore important to stress that legitimate grievances of any individual or group within the Nigerian nation should be channelled appropriately and in accordance with the 1999 Constitution.

As government cannot afford to prosecute counter-insurgency military action on multiple fronts, it is also pertinent that dialogue with aggrieved parties is put on the table as a preferred option.(NANFeatures)