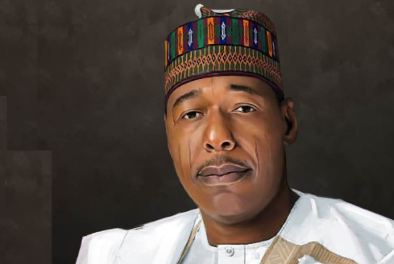 Governor Babagana Zulum of Borno State pleaded with the Federal Government to deploy technology to safeguard physical infrastructure in the state.

Governor Zulum made the call in Maiduguri at a town hall meeting held to address destructions of power and telecommunication stations in the states.

He pointed out that the state had been in darkness for the past nine month because insurgents had repeatedly blown up power generation stations.

READ ALSO:How Policeman Was Killed During Clash With Police, Okada Riders In Ajao

Speaking further, he said it was also important for citizens to be sensitized so that they would have the moral obligation to protect all government infrastructure in their domain given the huge investment the federal government was making in rehabilitating neglected infrastructure and construction of new ones across.

Zulum said sometimes in January this year, insurgents planted explosive devices and detonated them on some of the high tension wires that supplied electricity to the state.

He said after the first destruction of the power lines, “we mobilized resources to effect necessary repairs both at the federal and state levels. After sending millions of naira, the excitement was short lived as the insurgents, 24 hours later, destroyed the repaired lines along with other which subjected the people to despair and hopelessness.”

Zulum commended the President Muhammadu Buhari for approving the establishment of an alternative power supply to the state through the Nigerian National Petroleum Corporation.

He said the installation of thermal energy station in Maidugiri was signed by the NNPC and contractors, hence, the contractors would be mobilized to site and the project would be completed  in the next six months.

The governor noted that Buhari had directed the Ministry of Power to look into the possibility of providing 150 megawatts of solar energy plant in Borno State to ensure sustainable power supply to the state.

Also speaking, the Minister of Information and Culture, Lai Mohammed, justified the various loans borrowed by the Federal Government, saying they were used to build world-class infrastructures that would benefit generations of Nigerians and reverse the massive infrastructure deficit in the country.

He lamented that the efforts of the government were being thwarted by some unpatriotic citizens through wanton destruction of critical infrastructure, thereby depriving the citizens the privilege to benefits from the projects and services provided.

He said: “Railway tracks are being subjected to wanton vandalism, bridge railings are being removed, manhole covers are being pilfered, and so are critical aviation, power and telecommunications infrastructure.”

“The consequences of such unpatriotic action and behavior, aside endangering the lives of fellow innocent citizens, include the toll it takes on the government’s limited revenue to replace, rehabilitate or totally reconstruct such destroyed infrastructure.”

He said the town hall meeting on the protection of infrastructure was to create in the public mind that government property were citizens’ property and so must be protected for the benefit of all.

Theatre Commander, North-East joint taskforce, Operation Hadin Kai, Major General Christopher Musa, said there were saboteurs among the people in the communities who gave insurgents information about the movement and operations of the military.

He said it was important to look inwards and try to fish out the culprits.

He suggested that the items used for the infrastructures and projects be marked with carbon markers so that it would be difficult for those selling the vandalised equipment.

Related Topics:Gov. Babagana Zulum
Up Next