'It Would Mean A Lot To Win It, Lewandowski Speaks On Ballon d'or Hopes 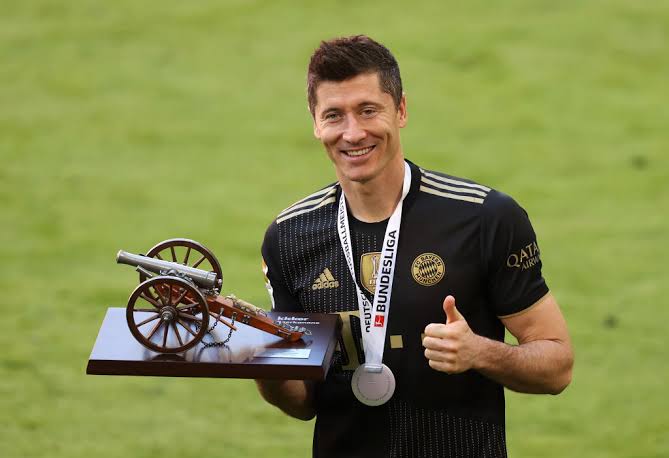 Prolific Bayern hitman, Robert Lewandowski has said it will mean a lot to him should he win the 2021 Ballon d’Or award.

Lewandowski was in incredible form as Bayern Munich won a treble in 2019-20, but the award was cancelled due to the COVID-19 pandemic. However, the 33-year-old has maintained his incredible standards and was named on the 30-man shortlist for this year’s prize.

Last season, the centre-forward broke Gerd Muller’s long-standing record of Bundesliga goals in a single season, netting 41 times in the league and scoring seven more across all other club competitions, the most of any player in Europe’s top five leagues.

Lewandowski has not surrendered that position this season, with his 13 strikes in all competitions lifting him above second and third-placed Erling Haaland and Karim Benzema, on 11 and 10 goals respectively.

The Poland captain feels his astonishing level of production makes a good case for him to win the award, despite competition from the likes of Kylian Mbappe, Benzema and six-time winner Lionel Messi.

“The possibility of winning the Ballon d’Or means a lot to me, it makes me feel proud, if you look at everything I’ve achieved, not just this year, last year as well when they cancelled the ceremony, I’ve won a lot of titles, scored a lot of goals,” Lewandowski told Marca.

“It would mean a lot to me to win it, having won the Champions League, the Super Cup, the Club World Cup. Breaking Gerd Muller’s record of [40] Bundesliga goals [in a single season] was also a big achievement, one which made me very proud and happy.

“Everyone can see what I have done and keep doing. My achievements speak for themselves because my last two years have been a big achievement, not just for me but for any player in history.”

Of his many achievements over the last two years, breaking revered goalscorer Muller’s record is one of the most special to Lewandowski, who surpassed the late Bayern legend on the final day of the 2020-21 Bundesliga season with a 90th-minute strike in a 5-2 victory over Augsburg.

“I have to say that I couldn’t sleep well [the night I broke Muller’s record],” Lewandowski continued. “I remember the week before the game well, I heard I was on the verge of breaking the record. Until then the importance of breaking it hadn’t really dawned on me, not just for the Bundesliga but in terms of football history.

“The day of the match I thought “this is mentally tough because it’s all anyone is talking about”. I knew I was so close, on the verge of making history, it was hard, but after scoring in the final seconds of the game I said to myself, “this is like a Hollywood movie.”

“I was very proud of myself, of my team-mates, because they helped me a lot to break the record. To be honest, I still can’t truly appreciate the magnitude of it, but I know what it means to people, they remember that record stood for [nearly] 50 years.”