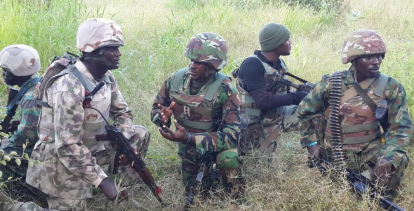 Troops of the Nigerian Army, on Tuesday, resisted a terrorists’ attack on Ngamdu, a border town between Yobe and Borno States.

Ngamdu is under Kaga Local Government Area of Borno and about 100km to the capital, Maiduguri.

It was learnt that the insurgents tried to raid a military base in the area but were stopped by soldiers already on alert.

The sect members were said to have moved in a Mine-Resistant Ambush Protected (MRAP) and gun trucks.

“As they approach, our troops swooped on them from the air and ground dealing decisively”, a source told Newsmen.

The officer said troops carried out a mopping-up operation after the battle which left a number of terrorists dead.