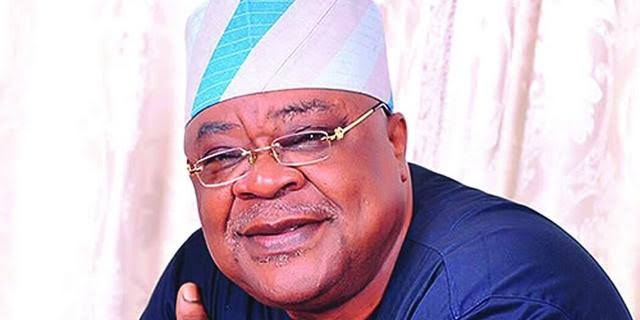 This piece written by journalist turned politician Kehinde Olaosebikan was originally published in June 2020 to mark the 70th birthday of Chief Adebayo Alao Akala who died on Wednesday, January 12, 2022

It is no exaggeration to say that the world is agog today celebrating the birthday of a former Governor of Oyo State, Otunba Christopher Adebayo Alao Akala as he turns 70. I know there are several other people including world great achievers born on this day, I am not sure that there is any other person being celebrated and appreciated today  more than  the ebullient, pragmatic, charismatic, munificent 16th Governor of Oyo State, across the globe.

Conversely, as there is no way one would be in this world without having enemies, no matter how good or generous one is, some would still hate for no reason whatsoever. This period provides opportunity for the haters of Alao Akala too. It is an opportunity to hate themselves more and carry their heavy burden of hatred. Except,  they could permanently close their eyes and block their ears, what they have been reading, hearing and watching from last week would have made them feel so terrible about themselves.  It is a time they would ask, why do I hate this man? Probably, the time, they would cease hating him. That is however, their own, wahala.

But why is Akala so loved by the people? The simple answer is love and forgiveness. Love begets love and when you forgive, people respect and love you the more. At home, Akala plants seeds of love. He gives love as a family man and this takes root, germinates and goes ahead of him wherever he goes. This is why his love for Ogbomosho is non pareil. Akala loves Ogbomosho and he doesn’t pretend about it.  Alao Akala was born into a Christian, Baptist family and he has never deviated from that path. He doesn’t joke with his faith and he holds tight to it. The yearly Carol Service in his Ogbomosho home is a must every year. He loves his religion and he flaunts it. Akala was in the Police Force and he shows love and loyalty to the force till tomorrow.

Just like President Muhammadu Buhari who has never hidden his love for his family, his native Daura town, his tribe Fulani, his profession, the Military and Islam, his religion; Alao Akala loves and feels proud always about his roots, Akala family, Ogbomosho, Baptist, Nigeria Police and Oyo State.

This is not a matter of promoting tribalism or nepotism, it is a reality that before you are from a city you are first, a product of a family and before you are a citizen of a state , you are an indigene of a local government area and before being a Nigerian , you are from a state. It is only somebody with love for his family that can be genuinely passionate about his town, and so on. President Muhammadu Buhari will continue to win with overwhelming majority in the North against any politician. No matter who is the opposing candidate, President Muhammadu Buhari would win across the nation, if there is room for a third term. It is the power of love and a solid base.

To command a great consistent followership especially in politics, you need a base where you are recognized and loved by your people. I know some would want to controvert this with the victory of President Olusegun Obasanjo in the 1999 elections but those were exceptional circumstances and times.

As I celebrate the 70th birthday of Otunba Christopher Adebayo Alao Akala in my home today, like many others are doing privately in their homes all over the world, let me illustrate his high sense of love and forgiveness with a personal experience I had in an Ibadan based radio station about this time, ten years ago. I was the guest on a live program anchored by the best of presenters in Oyo state then, when the Chairman of the station called in and stopped the live program. What were we discussing? Akala’s birthday and his achievements in office.

We were about 20 minutes into a one-hour program when the chairman of the station phoned the producer and expressed his displeasure with my exponentiation and breakdown of Akala’s achievements and ordered the immediate stoppage of the program. The chairman did not want to hear any explanation on the consequences of his act being explained to him by the producer, as he just ordered that the program must be terminated, forthwith. He who pays the pipers, dictates the tune. The program was stopped and the three of us were agape for minutes before I stood up and left their studio in a big first generation, hotel then.

As I got out of the studio, I met about 10 journalists at the lobby of the hotel who had come for a function in the hotel. Apparently, having listened to the program, they were concerned on why the program was brought to an abrupt end. I told them that what happened. They described the situation in many unprintable words.

While on the way to my office, I got a call from the Deputy Chief of Staff to Governor Alao Akala, Alhaji Razak Gbadegesin who also listened to the program and was miffed by its termination. He asked me to come to the Governor’s Office. After explaining the circumstances surrounding the abrupt ending of the program, he said we must take it up with the Nigerian Broadcasting Commission (NBC).

We put up a very strong petition against the unprofessional conduct of the radio station. Satisfied that we had a good case, Alhaji Razaki Gbadegesin and I with another person, a lawyer went to meet the Governor to brief him on our plan to ‘deal’ with the erring radio station.

To our dismay, Governor Akala asked us to let the matter go. He said we should forgive them and forget about the matter entirely. We tried to argue but Governor Akala stood his ground. With Governor Akala, the matter ended permanently there. It however got a casualty at the other end, where it led to the exit of the versatile broadcaster from the station. He was sacked for featuring an ardent Akala supporter on his program. I am glad the highly versatile seasoned broadcaster is doing pretty well in another FM station in Ibadan, today.

In life, we should love and forgive, unconditionally like Otunba Christopher Adebayo Alao Akala does.

Six Things You May Not Know About Ernest Shonekan