The married lady who was reportedly the object of desire by Nigerian musician, Burna Boy leading to the shooting incident at Cubana club, Victoria Island, Lagos has finally opened up.

The lady, identified as Briella took to her Instagram story to share vivid details of what transpired that night at the Cubana Club and how Burna Boy escaped without a scratch.

According to Briella in her statement, she and her husband came into the country for a wedding and they were at a club celebrating the newly weds when Burna Boy and his friends arrived.

As the night progressed, one of Burna Boy’s escort approached her on his behalf and she declined and also made it known that she was there with her partner.

The messenger from Burna Boy was said to have approached Briella two more times and the third attempt triggered the people around her to ask what he wanted. Words were exchanged and a small fight ensued. The security men at the place fixed the situation, but Burna Boy’s friends reportedly started another fight and went into a shooting spree after what seemed like a signal from the singer, the environment was tensed as people scrambled for safety.

Briella affirmed that one of the people in their group tried to get Burna to talk to his friends but he laughed at him and was escorted to his car by his security men. A bullet grazed Briella’s husband’s head while another of their friends was shot in the thigh and was rushed for a surgery.

According to the traumatized young lady, there has been no footage or public statement addressing the situation not to talk of justice. 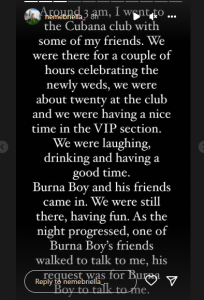 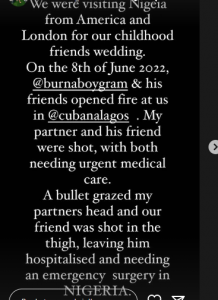 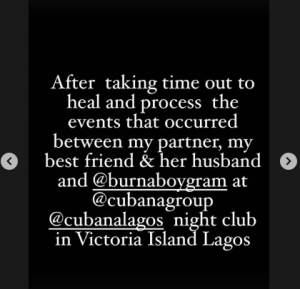 Her clarity on the incident has sparked massive controversy as many social media users took to their handles to drag the self acclaimed African Giant. Many others called on the appropriate authorities to look into the matter and ensure justice is served.

@poojamedia: The lady that Burna Boy approached has shared her story, police should take it up, and invite Burna Boy & his friends with guns for their part, Cubana club should provide CCTV & justice must be served.

You can’t enter a club & be shooting like GTA.

@bellz_beautybase: “We know he is badly behaved but why is no celebrity talking about this or condemning his act? Gosh!!”

@db_naturals_: “It’s how Burna just threw the allegation to the wind when he replied. For some reason no celeb even spoke about this, if it was someone else they’d have written an epistle

@mayorsoj: “Burna Boy sings about human and social justice but does otherwise on the street. He really needs to fix up. ‍♂️”

@zenabless: “Burnaboy notoriety is getting out of hand. He’s not above the law, he should be arrested along side with his gang.”

@ugwunnaejikem: Burna is deservedly getting the smoke, but me I wanna talk about this foolish behavior where you won’t leave a girl  alone when she says “not interested”…

You approach a woman & she refuses your advances yet you keep disturbing her, are you a clotpole???