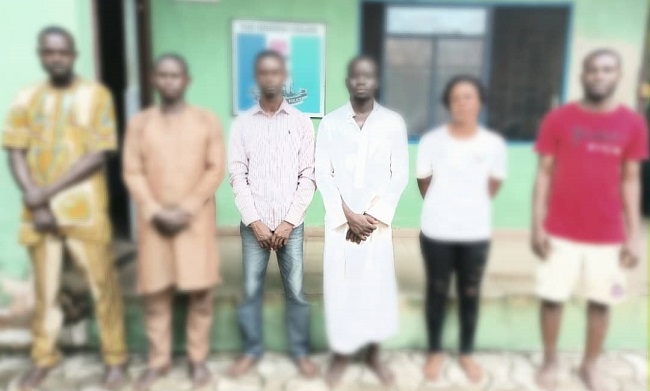 Operatives of Oyo State Police Command have arrested six suspected members of an armed bank robbery gang, including a banker who is a contract staff/marketer in a new generation bank while planning to attack one of the financial institutions a week ago.

The criminal armed bank robbery gang with the banker involved was said to have specialised in carrying out well-coordinated robbery attacks in banks.

Making this known on Monday, the command’s Police Public Relations Officer, SP Adewale Osifeso, said that they were nabbed at their Agara Odo-Ona hideout along Akala Expressway, Ibadan, on Monday, June 13 at about 9 pm after allegedly concluding plans to carry out robbery attack on another new generation bank within the metropolis in the early hours of Tuesday, June 14.

The PPRO further stated that the suspects including the banker had confessed to their involvements in armed bank robbery operations which included arms procurement and clandestine intelligence gathering ahead of the proposed date of perpetrating the dastardly act.

He said: “While comprehensive investigations are in progress to crack down on the criminal network and other accomplices, the Oyo State Police Command enjoins the good people of the State to continue partnering with the police in terms of providing timely and credible information valuable in curbing criminality and maintaining the relative tranquillity enjoyed in the state.”