Why Lawmaker Was Slapped By Political Godfather 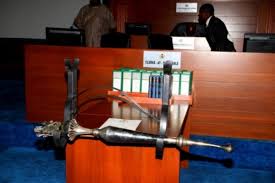 The Ebonyi State House of Assembly on Wednesday ordered the arrest and immediate prosecution of the chairman of Ohaukwu Local Government Area of the state, Mr. Clement Odah for allegedly slapping a member of the house, Chinedu Onah.

The incident reportedly happened in a committee room of the house on Wednesday.

The council chairman who is alleged to be the political godfather of the lawmaker who represents Ohaukwu South State Constituency was said to have been angered by reports that his political godson, Odah influenced the removal of one of his nominees into the Local Government council.

The political godfather was said to have expressed bemusement on why the lawmaker he made would turn against him.

The action was reportedly witnessed by the deputy Chief Whip of the house, Benjamin Ezekoma who formally brought it to the attention of the House of Assembly in session.

Upon the prayers of the House Leader, Victor Aleke, the House resolved that the council chairman be arrested and prosecuted.

The lawmaker, Onah, in his reaction said that he maintained his dignity in order to protect the dignity of the House of Assembly.