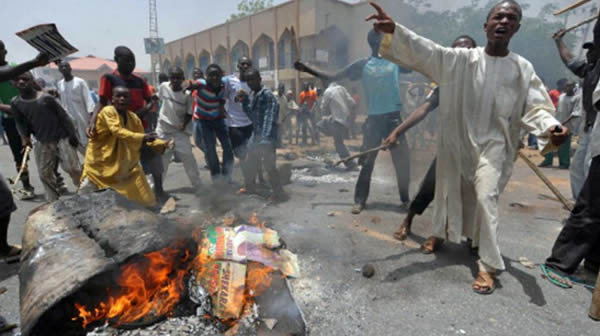 The killing of innocent Nigerians by bandits and Boko Haram sect in the Northeast part of the country have not gone down well with many Nigerians, who have began to call out their leaders to address the prevalent insecurity.

The reactions was sequel to killing of 81 person by Boko Haram insurgents, on Tuesday, in Gubio Local Government Area.

About the same time more than 40 persons were also reportedly killed in Faskari Local Government Area of Katsina State.

Also, protesters in Katsina state, on Tuesday, burnt down a billboard with the photograph of President Muhammadu Buhari and Governor Aminu Masari, in protest of the  killings in the state by bandits.

Many Nigerians have now taken to the microblogging platform, Twitter, to trend a hashtag “NorthernLivesMatter”, to call on Northern leaders, especially the president who is from the North, to address the insecurity challenges of the region.

Buhari Has A Smirk As He Talks Press Freedom!