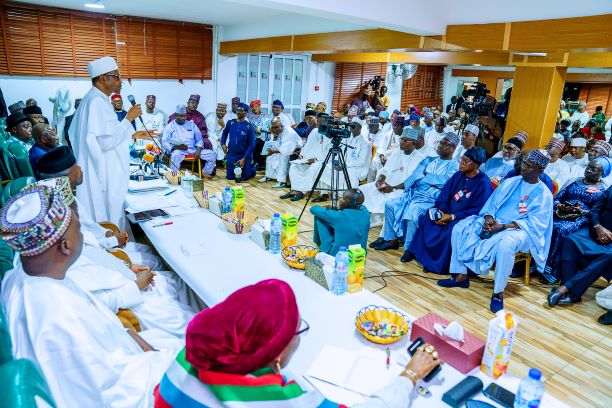 The National Working Committee, NWC of the All Progressives Congress, APC dissolved at the Presidential Villa meeting of the National Executive Committee, NEC on Thursday has rejected its dissolution.

The NWC has thus pledged to weigh legal redress for the dissolution which it claimed was illegally done.

The NWC resolution was signed by the National Vice-Chairman, South-South, Hillard Eta and the Acting National Secretary, Waziri Bulama for and on behalf of 18 of the 20 members of the dissolved NWC.

Remarkably, among those it claimed were supportive of the rejection was the dead Acting National Chairman, Senator Abiola Ajimobi.

The NWC in a statement said in part:

”The National Working Committee of the All Progressives Congress wishes to reiterate its earlier position that Chief Victor Giadom has no authority or whatsoever to convene a meeting of the National Executive Committee of our party.

“Article 25(B) of the Constitution of the APC is explicit that only the National Chairman or the National Working Committee (NWC) is given the prerogative of summoning meetings of the emergency meetings. The same position of the Constitution makes it compulsory for a notice of minimum of 14 days in respect statutory quarterly meetings and 7 days in respect of emergency meetings.

“We noted that Chief Victor Giodom had conducted a virtual meeting purportedly to be a National Executive Committee (NEC) meeting of our party wherein certain far reaching resolutions were purportedly reached. While the National Working Committee is studying the unfolding drama, it will be consulting with stakeholders and a team of lawyers on the next line of action.

“Therefore, all members of our party and concerned Nigerians are urged to remain calm pending the outcome of the consultations”.

Rivers APC Proud Of Giadom’s Role In Dissolution Of NWC