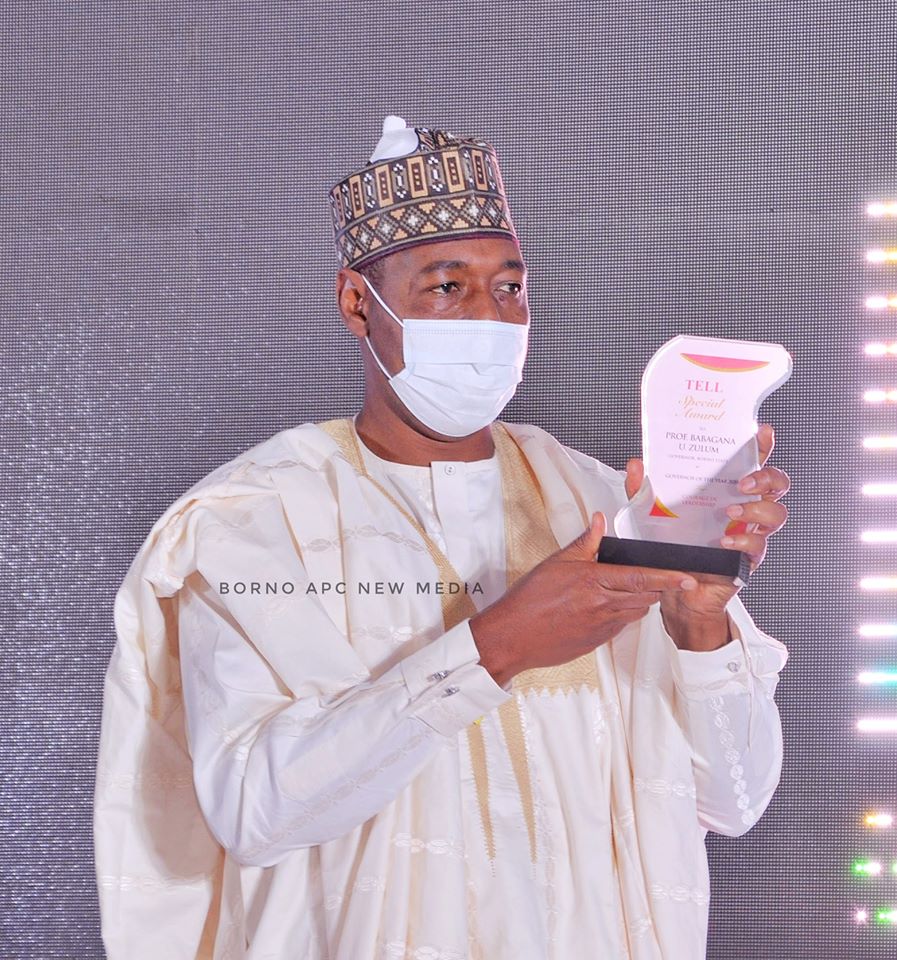 Tell Magazine on Monday surprised Borno Governor, Professor Babagana Umara Zulum with a special award as Nigeria’s governor of the year, 2020, for courage in leadership.

President and editor-in-chief, Tell Communications, Mr Nosa Igiebor, led a delegation to Maiduguri to present both a letter of the nomination and the award itself. Tell, one of Nigeria’s oldest surviving news magazines, was first published on April 15, 1991.

In company of Tell’s chief operating officer,  Dejo Oyawale and executive editor, Wola Adeyemo, Mr Igiebor entered Maiduguri on Sunday without Zulum’s knowledge and requested to take advantage of a public presentation of a compendium of media reports on the governor, which had been publicized in advance. The event was well attended at the multipurpose hall of the Government House in Maiduguri.

In his remark before presenting Tell’s award to Governor Zulum, Mr Nosa Igebor, 68-year old veteran journalist, said the governor has remained consistent in his demonstration of unconventional courage in serving Borno people, since May 29, 2020.

“Leadership entails courage, commitment to the ideals of selfless service and unwavering dedication to pursue the service  for the benefits of the people you lead and serve. Since your assumption of office as Governor, you have consistently demonstrated these sterling qualities of leadership.

“Your style and substance are unmistakable and a welcome breath of fresh air to Nigeria’s sterile political space of self-aggrandisement. We are, indeed, very impressed by your resolve and determination to succeed in your mandate of delivering the dividends of democracy to the long-suffering people of Borno. While some other state administrators, including those whose domains enjoy relative peace, reel out excuses to the citizenry, you have remained undaunted in fulfilling your promise to a state that is under siege”.

“Your boldness to state things in black and white no matter the circumstances, has endeared you to many. In short, you have become the voice of the voiceless as you have proven that government is not for the fainthearted, neither is timidity or criminal silence a prerequisite for real term growth and development.”

“In view of the impressive profile that Your Excellency has built in a relatively short time and which has gone a long way to restore hope, not only to the people of Borno State, but to the entire Nigerian citizenry, it is with much delight that the Executive Directorate of Tell Communications Limited is honoring and celebrating the most Courageous and Result-Oriented Governor in Nigeria, Professor Babagana Umara Zulum, with the Tell Special Award as Governor of the Year for Courage in Leadership (2020). Congratulations sir”

Governor Zulum, in response, expressed appreciation to the management of Tell Communications, saying he considered the award, a challenge to do more.

Zulum described Igiebor, as one of the veteran journalists who fought for Nigeria’s return to democracy in the 90s despite arrests and detention, and has been holding leaders accountable, through his 43 years of journalism.