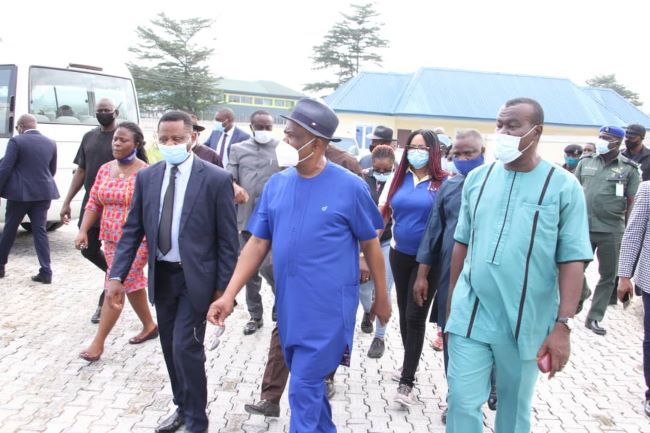 Governor Nyesom Wike has challenged Igbo leaders to take the initiative from the Indigenous People of Biafra, IPOB by not allowing the group and its leadership to canvass Igbo position in the polity.

Speaking when he hosted the leadership of the Nigerian Guild of Editors (NGE) the Rivers State governor also charged the media to always hold public office holders accountable to the people.

Governor Wike further said the EndSARS protest was peaceful in Rivers State until IPOB allegedly took laws into their hands.

“I don’t support criminality.  IPOB killed 6 army officers, four policemen,  burnt police stations and court buildings. This is Rivers State. Go to Oyigbo and see the level of destruction. Now the State Government will be rebuilding those facilities.

Flaying Igbo leaders for supposedly allowing criminals to speak for them, he said:

“If they (IPOB) are aggrieved,  instead of channelling it to the right quarters,  they go and kill innocent people and destroy public places”, he stated.

Noting that the media has become muted, he said:

The governor noted that in time past,  the Nigerian Press was a strong voice and conscience of the society, but wondered what has whittled down their powers.

“What I have seen of you is that you praise us and give us award because of relationship or friendship. That’s not the way it should be. Challenge us; the people in authority and we will sit up to our responsibilities. We will have no choice than to perform and serve the people as it should be.

“My support for you has to do with the fact that you are supposed to tell the truth of what is happening in Nigeria.

“There was a time you were exposing the ills of society. If not for you certain things will not be known. Assume your role, grow strong again and speak out, ” he said.

In his speech, the National President of Nigerian Guild of Editors (NGE), Mustapha Isha said governor Wike has remained consistent in his support to the guild.

The members of the guild later accompanied Governor Wike on  project tour of the Rebisi Flyover, Real Madrid Football Academy and the Mother and Child Specialist Hospital.