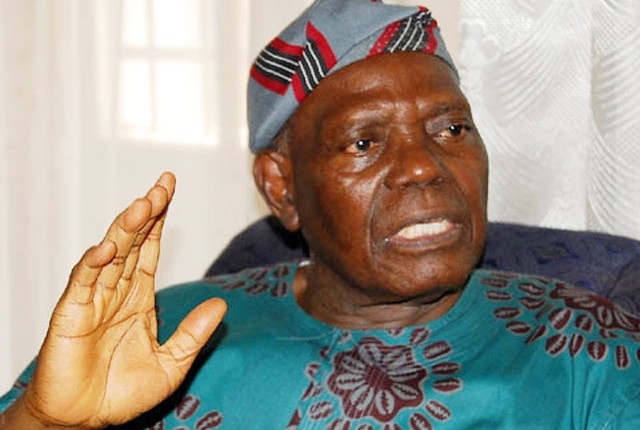 Chief Bisi Akande, former Osun State Governor has become faulted the ongoing All Progressives Congress (APC) membership registration/revalidation exercise which has been flayed by some associates of the national leader, Asiwaju Bola Tinubu. He has become the most prominent Tinubu ally to go public on it.

Faleke had cited the second wave of the COVID-19 pandemic as reason why the party should stop the exercise. However, the party easily dismissed that excuse saying it would adhere to social distancing regulations of the authorities in conducting the exercise.

On his own part, Chief Akande, who is the pioneer National Chairman of APC described the exercise as a waste.

He also described the caretaker Committee overseeing the affairs of the party under the leadership of Mr Mai Mala Buni, Governor of Yobe State, as abnormal.

Akande, a strong Tinubu ally, spoke shortly after he was registered by the party delegation led by Senator Lawali Shuaibu at his Ward 04, Unit 012, Isedo1, Ila-Orangun, Osun State on Wednesday.

“I feel more humbled and honoured that the same party – the APC – singles me out for Membership Revalidation in my village home at lla Orangun.

“Please, permit me to make two observations. The first is that in normal circumstances, a Caretaker Executive Committee for a political party is an abnormality. If not carefully controlled and expeditiously managed, most aberrant authorities end up in contempt and disgrace.

“For this reason, I want to urge the present APC Caretaker Executive Committee to resist all temptations of sit-tight syndromes that usually characterize most handpicked authorities in most underdeveloped countries of the world.

“The second major perception is that APC leadership might be wasteful and unappreciative of the proper use of money in a kind of scanty economy in which Nigeria now finds itself.”

“These seeming ugly perceptions put into abeyance the applause of the two national election successes that the original APC register enjoyed since its completion on 15th February, 2014 and the over one billion Naira of 2014’s value that the original register cost when APC had no money of its own.”

2023: Jonathan Only Laughing With APC – Baraje

Why Osinbajo Should Resign – Bakare