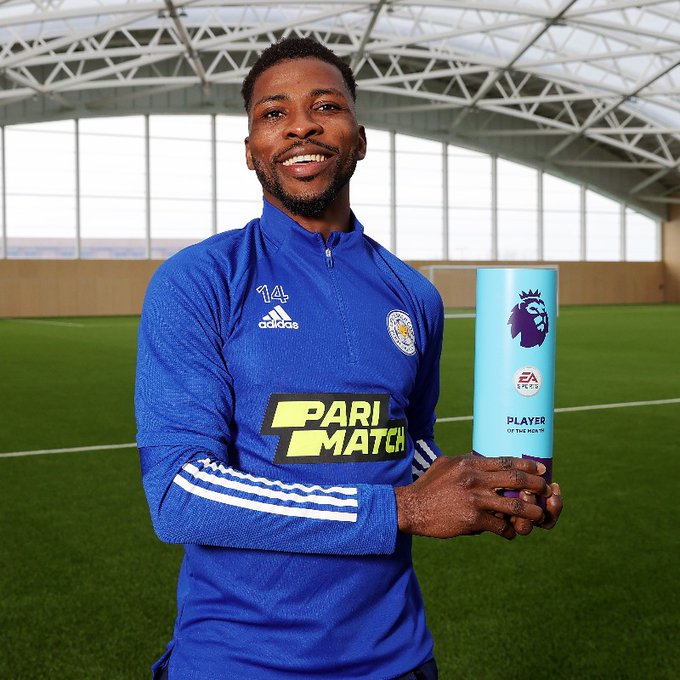 The Nigeria international, Kelechi Iheanacho scored five goals in March, including the equaliser against Brighton & Hove Albion, a stunning volley away at Burnley, which was in contention for the Budweiser Goal of the Month award, and a hat-trick in Leicester City’s 5-0 win against Sheffield United at King Power Stadium.

He was one of eight players shortlisted for the award and beat the likes of Tottenham Hotspur’s Harry Kane, Manchester City’s Riyad Mahrez and Manchester United’s Luke Shaw to the accolade.

Iheanacho is also the first Leicester City player to claim the prize since Jamie Vardy in October 2019.

The Nigerian has re-emerged as a quality striking option for the Foxes since the turn of the year.

He has scored eight goals in all competitions so far in 2021.

He took the form to another level last month, however, as he netted in three successive Premier League games for the first time in his career.

Reacting to being named player of the month, the striker said, I’m so pleased and honored to win this award,” he told Leicester’s official website.

“I’m really enjoying playing at the minute and hopefully I can push on and help the team to finish as high as possible this season.”

Related Topics:Kelechi IheanachoPremier League Player of the Month
Up Next