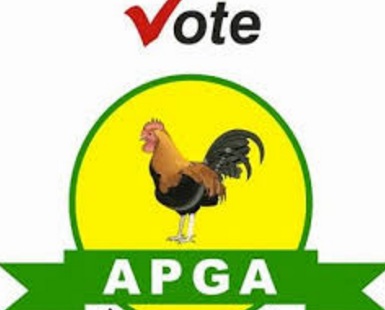 The All Progressives Grand Alliance, APGA has so far raked in about N176 million from the sale of nomination and expression of interest forms from aspirants wishing to vie on its platform for the forthcoming Anambra State governorship election, it was reported on Thursday.

The N176 million was garnered from the eight aspirants who have purchased the party’s expression of interest and nomination forms for the November 6 governorship election.

The eight who have picked the APGA forms are expected to partake in the party’s primary to choose the candidate to represent it in the Anambra governorship election. The primary is scheduled for June 23.

Three of the aspirants who have picked up the APGA forms are serving members of the Anambra state House of Assembly.

Soludo who is a major contender in the Anambra state governorship came to the party’s national headquarters to pick his forms on Tuesday with a large number of his APGA supporters who were drumming and dancing and hailing him.

In the guideline made public, the party put the cost of expression of interest form at N2 million, while the nomination form is N20 million, respectively.

GreenWhiteGreen GWG reports that APGA is the ruling party in the state and anyone who picks the ticket of the party is expected to receive the strong support of the outgoing governor, Chief Willie Obiano in the bid to sustain his legacy.

At present there is serious division over where the governor is tilting his support given the involvement of a number of his key followers in the contest.