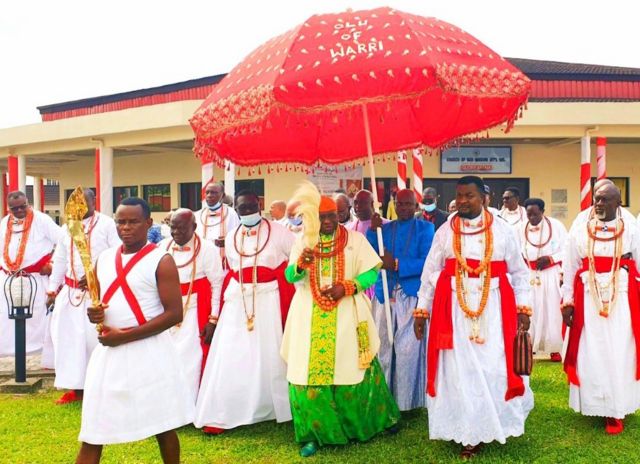 The Late Olu of Warri in Procession

The final funeral rites for the departed 20th Olu of Warri, His Majesty Ogiame Ikenwoli, on Friday commenced with a commendation church service in Warri, Delta State.

The service marked the beginning of a 14-day burial activities which will climax with a final ceremony for the departed monarch at Ode-Itsekiri, the ancestral home of the Itsekiri people worldwide.

However, notable Itsekiri chiefs and personalities including the Ologbotsere (Prime Minister) of Warri, Chief Ayiri Emami; the members representing Warri Federal Constituency at the House of Representatives, Chief Thomas Ereyitomi; Prince Micheal Diden aka Ejele and others were conspicuously absent at the ceremony.

But present at the ceremony were the former the Christian Association of Nigeria (CAN), Papa Ayo Oritsejafor; Bishop of Church of God Mission, Warri, Curtis Fianu and the General overseer of Foursquare Gospel Church, Rev. Sam Aboyeji.

A biography of the departed Olu of Warri was read by Prince Yemi Emiko, who described the late monarch as a man of peace.

Prince Emiko also noted that Ogiame Ikenwoli’s reign brought about development to the Itsekiri Nation including ensuring massive expansion and development of Ode-Itsekiri.

In his brief homily, the presiding Bishop of Church of God Mission, Warri, Bishop Fianu, harped on the need for everyone to “make good use of their lifetime”.

His death was announced on April 5, 2021 following the pronouncement of Prince Tsola Emiko as his successor, eldest son of the 19th Olu of Warri.