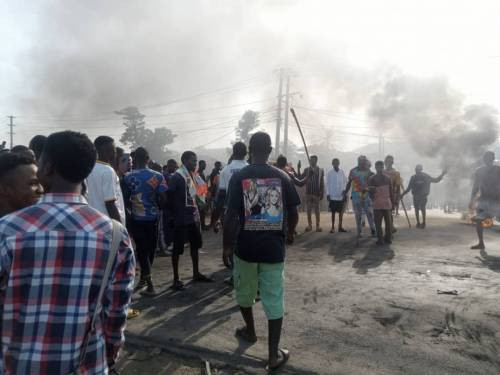 Many travellers are currently trapped on the Abuja-Kaduna road on Saturday as angry residents and protesters blocked the road over attacks, especially the killing of a 13-year-old girl by bandits.

Residents said bandits stormed the house of the village head and abducted his family as well as other persons in the community.

A  resident of the area told Daily Trust that they were not safe at home and their farms as bandits terrorized them unchanged.

“We cannot go to our farms and yet they will follow us to our homes to abduct us for ransom. They killed a 13-year-old girl, a security man in the village as well as abducted other residents including the family of the village head,” he said.

He explained that the residents only want security or to be allowed to protect themselves against the bandits and hence the decision to block the Kaduna – Abuja road to draw attention to their plight.

Meanwhile, Governor Atiku Bagudu of Kebbi on Friday night pledged to support security agencies in the fight against banditry across the state.

Bagudu gave the pledge while addressing parents, staff and students of Federal Government College (FGC) Birnin Yauri, during a sympathy visit to the college.

The governor assured that his administration would leave no stone unturned until all the abducted persons were rescued, adding that ensuring the security of life and property was  paramount.

The governor also commended parents and guardians for remaining calm and sustaining prayers to God for His intervention.

In separate remarks, the parents and teachers of the student expressed gratitude to security agencies for their prompt response in rescuing some of  the abducted staff and students.

Spokesperson of Kebbi State Police Command, DSP Nafiu Abubakar, said in a statement that the number of those abducted in the school, was yet to be ascertained, adding that rescue operation was still continuing.

NAN reports that before departure from Yauri, the governor visited Yauri General Hospital to sympathise with victims of another attack by bandits.

He also paid homage to the Emir of Yauri at his palace, and assured that the state government had increased security presence in the area.