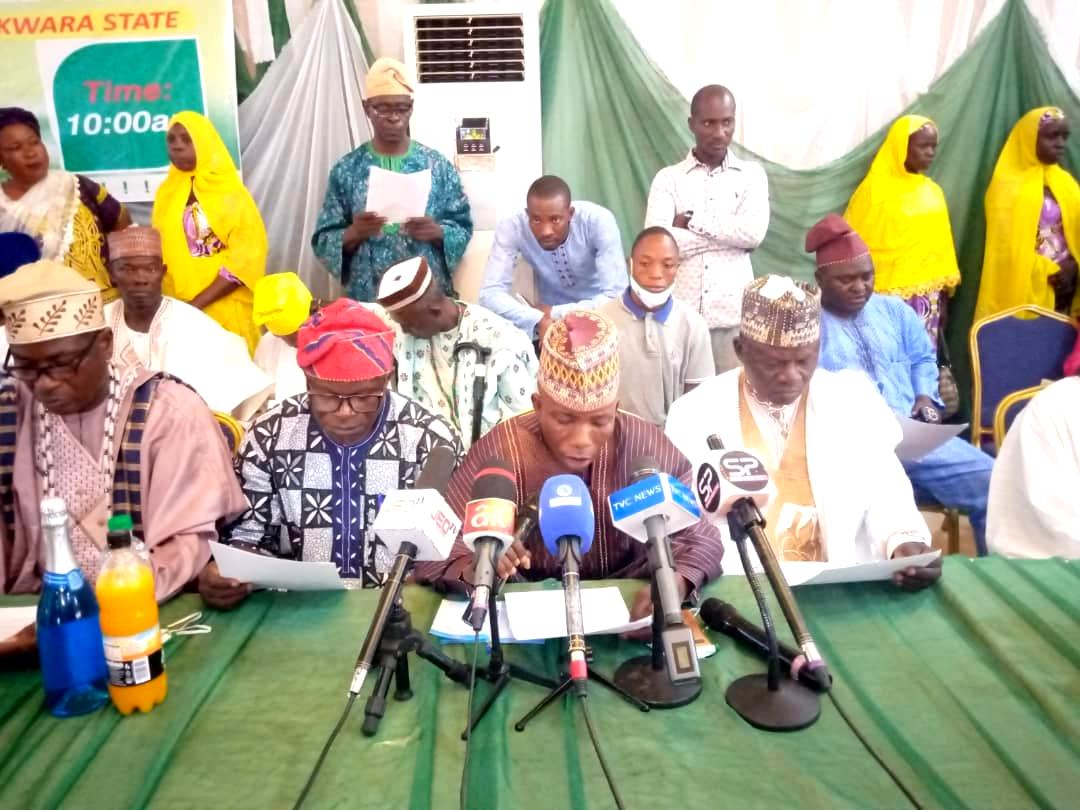 Following years of irreconcilable crisis in the ruling All Progressives Congress (APC) in Kwara State, after “O to ge” victory, some aggrieved members of the party weekend  dumped the party and teamed up to form a new political association described as the “Third Force” in changing political equation of the state.

Recall that the faction of Governor Abdulrahman Abdulrazaq  had been at loggerhead with that of the minister of Information and Culture Alhaji Lai Mohammed,Minister of state for transportation Senator Gbemisola Saraki and other splinter groups, over the control of the party which saw Hon Bashir Bolarinwa replaced by Alh Sanmari Abdullahi as the chairman of the party.

The aggrieved APC members, who included senatorial chairman, ward chairmen, local government chairmen, women leaders, youth leaders, as well as APC party stalwarts across all the 16 local government areas, among others, in IIorin indicted the national leadership of the party of supporting the political agenda of the governor.

They also accused the state governor and his loyalists in the party of alleged disenfranchisement in the recent membership registration and revalidation exercise.

Speaking on behalf of the decampees, the former state APC senatorial chairman for Kwara Central, Mallam Abdulfatai Abdulrahman, said that, “It is impossible to achieve the developmental goals we are aiming for KWARANS in the midst of chaotic situation we found ourselves in Kwara APC”, adding that their new party would be unveiled in due course.

The people, who tore their APC membership cards and burnt the party symbol of brooms, said that the plot to allegedly marginalize them was all about 2023 political permutations.

He said,”As you are all aware, Kwara APC has been enmeshed in one crisis or the other almost immediately after the party’s primary, stretching into the campaign period and lingering up to date.

“The crisis has gotten to its peak with the recent concluded APC membership revalidation and registration exercise in the state that was flawed with deliberate policies and grand orchestration to deregister and disenfranchise selected members of the party.

“The success of a political party is anchored on its popularity, intra party membership cohesion, integrity and sincere commitment to the service of the masses. All these are glaringly diminishing in Kwara APC as it is now.

“A grand design that denied majority of party members the opportunity to register and revalidate their membership across the state is a 2023 permutation agenda. We can never cross our fingers and watch the game from the sideline.

“The deliberate inaction to address the lingering crisis in Kwara APC has become obvious to all discerning minds that the agenda to deregister and refusal to revalidate thousands of members across the state was a grand plot that has the backing of the National Caretaker Committee of the party.

“From the highlighted points above, we the over twenty thousand card- carrying members of the All Progressives Congress (APC) which includes Senatorial chairman Kwara Central, local government party chairmen, local government women leaders, youth leaders, ward chairmen, as well as APC party stalwarts across all the sixteen local government areas in the state hereby denounce APC and form a KWARA THIRD FORCE for the yearning and betterment of Kwarans at large

“We are, therefore, calling on all well-meaning Kwarans to shun violence, unnecessary struggle and agitation on account of desperation to belong to a party that has thrown away a large chunk of its members”, he said.

Mallam Abdulrahman also said that the new party would be unveiled in due course as soon as possible.