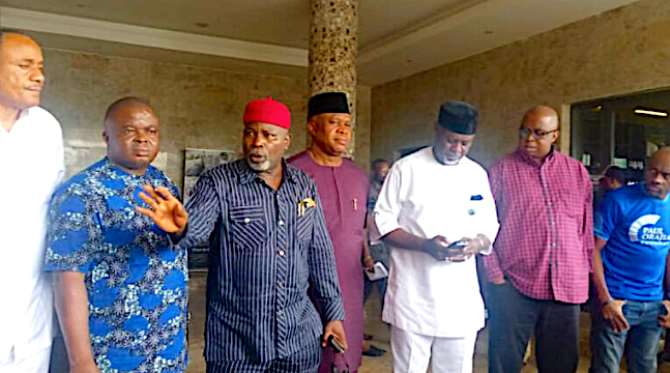 13 All Progressives Congress, APC aspirants for the party’s governorship ticket in Anambra State have put Governor Dipo Abiodun to task over how the 230,201 votes that he said Senator Andy Uba polled were generated on Saturday.

The aspirants spoke as Senator Chris Ngige, the leader of the party in the state said that there was no election. The punches against his declaration nonetheless, Senator Andy Uba was on Monday embarking on reconciliation moves to woo his aggrieved co-aspirants towards a détente.

GreenWhiteGreen GWG reports that the Governor Abiodun led panel had early on Sunday declared that Uba polled 230,201 votes out of 348,490 votes cast, while his closest rival, Johnbosco Onunkwo polled a total of 28,746 votes in the Option A4 method used for the election.

However, the other aspirants in the contest have alleged that there was no APC primary in Anambra saying that the results were the imagination of the panel.

Spokesperson of the aggrieved aspirants, Chief George Moghalu alleged that in all the 326 electoral wards of the state, delegates came out to vote, but that there was no APC team available to conduct the election.

Moghalu said: “The opportunity to participate was not provided for us the aspirants and the party members to choose who they want as the flag bearer. Elections have two planks namely, the primary and the main election and what a party does in the primary reflects what to expect in the main election.

“We consider what happened on Saturday as embarrassing and scandalous. We find it unbelievable that the election did not hold and a committee headed by a sitting governor would disapprovingly come out to announce the results that they wrote in whatever corner they were, either in a bedroom or even outside the state.

“We therefore reaffirm that the election did not take place in any part of Anambra on 26th June as initially planned.

“All the aspirants have been on the road in the last nine months trying to reach out to the people and building support bases and we encouraged our supporters to come out and vote at the designated points, but nothing happened,” the Anambra APC aspirants fumed.

“They started distributing materials around 6 pm far after the scheduled election time. In the guideline, four hours were provided for the exercise to end by 6 pm. And the annoying aspect of it was that somebody was announcing the result on Facebook.

“What they are trying to do is to endanger our party in this state and that we refuse to accept. We want free, fair, and credible primary so that a candidate can be chosen. If we decided to do it by consensus, they should require our consent.

That is what the constitution of the party says. You cannot shave somebody’s head in his absence. Certainly, we will seek justice in any manner that is appropriate,” the Anambra APC aspirants said.