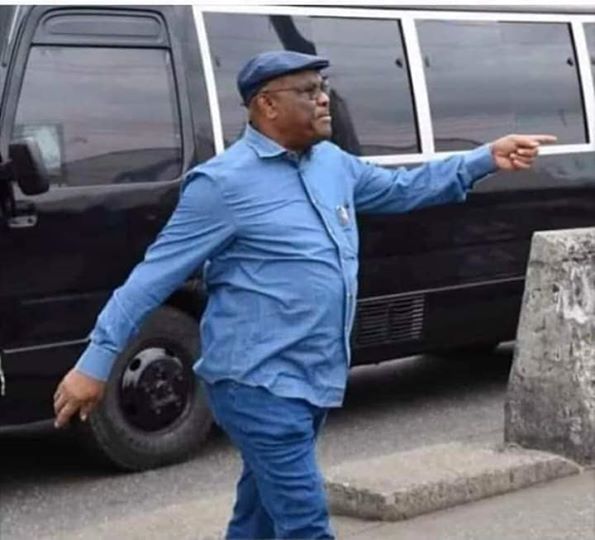 On Monday, July 12, 2021, Governor Nyesom Ezenwo Wike,  Govenor of Rivers State, did what most leaders, especially those elected to superintend the affairs of their people at various levels governance, are often too scared to embrace.

This is either as a result of under perfomance or the glaring inability to impact positively on their people and area of administration.

Governor Wike boldly mounted the podium at the Obi Wali International Conference Centre, Port Harcourt and with unshakable confidence, cerebral oratory and fearless advocacy, laced with admirable aplomb, exhibited the audacity of accountability, when he presented his scorecard.

He gave an account of his stewardship, in a progress report covering the six years since he assumed office as the  Governor of Rivers State on May 29, 2015.

Of course, many Rivers people will recall that the presentation of the performance scorecard had already been programmed as the culmination event of listed activities marking the second year anniversary of the second tenure in office of the Governor.

Yet, incredibly, every item listed on the activity chart, from flag-offs to inaugurations and a few other extras, had been accomplished with timely precision, performed by a distinguished cast of national and indigenous statesmen from across the geopolitical zones in the coutry and garnished with the flamboyant pomp and cultural pageantry, reminiscent of the proud, colourful, quintessential Rivers traditions.

It is indeed amazing that long after many states have forgotten how their own second year anniversaries celebration  transpired, Governor Nyesom Wike was still flagging off and commissioning projects across the length and breadth of Rivers State, two months after.

As a matter of fact, precisely six weeks ago, the activities for the celebration of the second anniversary of the second term in office were kick-started, with the flagging-off and commissioning of new and completed projects and for 40 days, Governor Wike, his cabinet and his array of distinguished special guests, traversed the length and breadth of the State to either commission or flag-off various development projects cutting across different socio-economic sectors.

The global Community and the entire nation saw the phenomenal harvest of projects, including roads, bridges, education, healthcare, housing, social welfare, sports and rural development across Rivers State, as the sounds and sights of the happy and grateful beneficiary institutions, communities and people, were beamed on live telecasts.

The very fact that he delivered on every single item listed on the programme of activities, which had been drawn up several weeks before the second anniversary, was not only remarkable for the audacity and confidence of his visionary leadership, but indeed an excellent reflection and astute exhibition of what governance accountability to the people is all about.

Other areas included, strategic housing development, robust and necessary equipment, in hard and soft logistics, as well as humanitarian support to security agencies, smooth and uninterrupted administration of justice, expanded frontiers in sports development, appropriate social welfare provisions, unparalleled recognition for culture/tourism and of course the entrenchment of a peaceful, rancour free, political atmosphere, which all featured prominently, even against the backdrop of the devastating COVID-19 pandemic.

Governor Wike highlighted the fact that since 2015, his administration has delivered over a thousand kilometres of Trunk-A roads; embarked on construction of phase one of the trans-Kalabari road, simultaneous construction of ten arterial flyovers, with three already commissioned and connected the ancient coastal community of Opobo to the rest of the State and the country by a tarred road.

He further said that his administration has also transformed not less than 18 major single lane roads to dual carriage ways with street lights, pedestrian walkways and covered drains and while noting that the dualization of Ahoada–Omoku, and Egbema Omoku roads is also underway.

He affirmed that his government has reclaimed vast swathes of sand-filled land for some of the coastal communities, including Abalama, Bakana, and Kula to advance their development and also started the sand filling of 55 and 42 hectares of reclaimed land for Abonnema/Obonoma and Okrika communities respectively.

In the education sector, Governor Wike said his administration has provided over 1200 classrooms and nearly 14,000 desks to over 200 primary and junior secondary schools, all in addition to the reconstruction, furnishing and equipping of several secondary schools, including some renowned and famous ones too, with modern classrooms, laboratories, libraries, sports facilities, staff quarters and paved interconnecting road networks.

“As a result of the concrete and targeted interventions, the education system is becoming more and more effective and qualitative in the State with enrolment and transition rates of over 98 per cent, while over 80 per cent have consistently recorded 5 credits and above pass rates, including Mathematics and English in WASCE since 2015,” he said.

All these and indeed many more, were succinctly and brilliantly packaged and presented in the compendium of 536 pages, which captures the fundamental achievements of the Governor in the last six years.

Central and integral to the amazing infrastructural transformation taking place all over Rivers State, is the international construction giant, Julius Berger, which has brought its globally renowned expertise, complemented by some critically recognized indigenous construction firms, in a formidable partnership with the  government, to deliver quality, enduring legacy projects that will and have met all International standards.

Indeed no leader or administration could be more committed and insistent on embracing and ensuring that the courage and audacity to entrench and ensure accountability, are upheld in delivering good and responsible governance to the people.

Of course, the six years account of stewardship presentation would not have been complete, if Governor Wike had ignored his nationally acclaimed civic role and responsibility, as a Governor and concerned Nigerian, who loves our country so much and wants our democracy to survive, to once again voice his fears and concerns of many voiceless Nigerians.

He drew attention to the state of the nation, especially the deteriorating economy, the worsening insecurity, the lack of purposeful national leadership and the strangulating hardship being faced by ordinary citizens, as a direct result of the visible failure and mismanagement of our democracy and diversity by the APC-led Federal Government.

One of his and what eventually became a national concern was the nomination of Ms. Lauretta Onochie as an INEC Commissioner and gladly, the matter has been appropriately handled by the Senate to the relief of Nigerians, which it appears had listened and acted on this timely advise by Governor Wike: “Where Mr. President lacks the courage to so do, then, the National Assembly, which has a responsibility to defend our democracy must endeavour to wake up on the right side of history by rejecting her nomination.”

The other matter which engaged Governor Wike’s attention is the proposed amendments to the Electoral Act, which is now before the National Assembly and while commending the House of Representatives for affirming and reassuring Nigerians on its positive provisions in the proposed bill on electronic voting and simultaneous transmission of unit results by electronic means, he offered the following advise:

“Everyone who means well for our democracy believes electronic voting and simultaneous transmission of results has the potential to prevent the large-scale rigging of election that has become regular in our electoral system. President Buhari readily attributes his victory in both the 2015 and 2019 polls to the introduction of the novel card reader device by President Goodluck Jonathan’s Administration; yet he has been overly reluctant on the need to midwife the birth of a new, transparent, efficient and trustworthy electoral system for the country.

“Let me therefore warn that we do not need a soothsayer to tell us that to allow the old ways of doing things and much vilified status quo to continue to prevail in our electoral system as recommended by the Senate’s version of the bill would be a complete disservice to the nation and a recipe for disaster for our country.

“Again, I hope Mr. President still cares about his legacy and would therefore prevail on the APC-controlled National Assembly to give the nation an Electoral Act with positive provisions on electronic voting and simultaneous transmission of results from the unit level to prevent rigging and guarantee trust, credibility and confidence in our elections.”

“The APC-led federal Government must step up and be alive to its constitutional responsibility to protect lives and property in all parts of the country or admit its lack of capacity and resign before the country collapses like a pack of badly managed cards on its hands. Enough of the excuses, ineffective actions and buck-passing”.

It has often been said that accountability is the very hallmark of good governance and excellent leadership and leaders demonstrate accountability by taking responsibility over the success and growth of the people and areas they administer by resolving to own up to commitments and promises that they have made.

Being an accountable leader is not an easy task but it is essential in order to be a change agent and to deliver real value to your people. Accountability therefore means being answerable to the actions and decisions made by the administrator and possessing both the vision of a leader and the courageous sagacity and  administrative acumen to execute that vision.

The accountable leaders are the ones that can take a challenging vision and make it a possibility, even when it requires asking for help when and where it is necessary. They regularly monitor and review how they are doing and take the time to celebrate wins along the way, despite the bumps that will periodically appear to delay the project.

In the last six years, Governor Wike has exhibited all the hallmarks of an excellent accountable leader both in projects delivery and governance, with his footprints everywhere across the 23 local government areas of the State, and even beyond and like the Governor himself says: “Take it or leave it, the truth is constant. There is no promise we made or project we set out to achieve that we have not fulfilled or delivered”.

But like all true accountable and transformational leaders, Governor Wike would rather leave the judgement of his performance for the people to make, even as he is convinced like many Rivers people are too, that his administration has lived up to its promises, made the desired difference and brought about the transformational changes that majority of the people had yearned for when they gladly gave their mandate and trust, six years ago.

Governor Wike captured this conviction aptly in the following declaration and pledge: “The sheer number of audacious projects we have rolled out and executed in the last two years clearly confirms our abiding promise to continue to deliver more development projects for the benefit of our State, our people and the nation until our last day in office.

“I wish to therefore assure you that there will be no let-up in our commitment and determination to deliver more projects to further consolidate the progress we have achieved in the days, weeks and months ahead.”

It is only fitting therefore to reflect on the six years of the administration of Governor Wike in the uplifting words of veteran journalist, International publisher, media mogul and indeed the doyen of post modern Nigerian journalism, Chief Dele Momodu: “Super congratulations to the Governor of Rivers State, Nyesom Ezenwo Wike, on the extraordinary job he has done in the last six years.

“I was proud to see a Nigerian leader render account of his stewardship two years ahead of the completion of his second tenure… May the good Lord complete the massive Projects he has assigned himself in the coming months. Amen”.

Nsirim is the Commissioner for Information and Communications, Rivers State