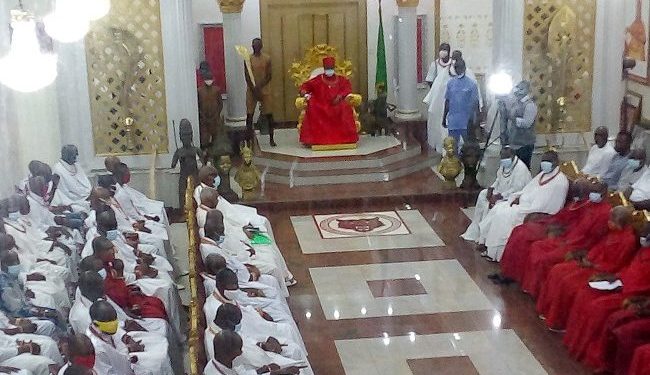 Chief Imam of Benin, Abdulfatai Enabulele, has pitched the tent of Muslim community in Edo State with Oba Ewuare II, as the rightful authority to take custody of the looted artefacts ahead of their return to the country.

The Chief Imam, who led Muslim faithful to pay homage to the Oba as part of their tradition to mark Eid-Kabir  celebration, said Muslims were behind the Oba in the return of the stolen artefacts.

“We, Muslims, do not support what is not right and what will cause conflict, problems. But we will support what will bring peace and development in our community as Muslims.

“That is why we are praying that anyone who will want to do anything that is not right, God should change that person. You don’t challenge nor contest with the Oba in Benin kingdom,” he said.

Enabulele, who frowned at the move by the Edo State government to be in possession of the artefacts when returned, said: “The Oba of Benin is the chief custodian of our revered culture and tradition as well as the stolen artefacts wherever they are in the world.”

He condemned alleged double standard of some persons in the state over the proposed return of the stolen artefacts because of their personal interest and executive positions which he described as greed and an attempt to fuel crisis within the Benin kingdom.

“We support the Oba that all artefacts should be returned to his palace,” the Chief Imam said and chronicled the beginning of return of the stolen artefacts from 1938 to 2013 during the reigns of Oba Akenzua II and Oba Erediauwa, stressing that those artefacts were brought to the palace not somewhere else.

Oba Ewuare II thanked the Muslims for the visit, just as he tasked them to continue to pray for the peace and development of the state.