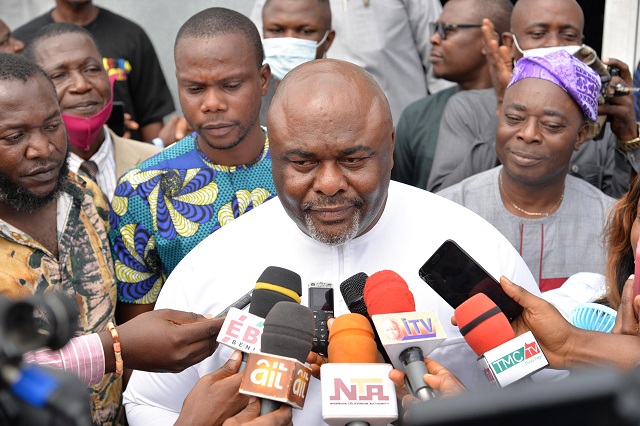 Erstwhile commissioner for Arts, culture, tourism, and Diaspora Affairs in Edo State, Osaze Osemwengie-Ero has denied being a money courier for Governor Godwin Obaseki saying that the rumour about him being accosted in Italy with $2 million cash belonging to the governor was wrong.

Speaking just after his return to Benin, Edo State after more than one year in custody in Italy, the erstwhile commissioner said that the governor being an investment banker would be foolish to have transported cash as was alleged.

Osemwengie-Ero who spoke to reporters as he touched down in Benin for the first time in more than one year, however, did not give the reason for his incarceration. He, nevertheless vowed to lead a protest at the Italian Embassy in Lagos over what he claimed as the illegal incarceration of more than 300 Nigerians in Italian jails.

GreenWhiteGreen GWG reports that the detention of Osemwengie-Ero turned into political gossip in the period leading to the Edo State governorship election as the right hand man of Governor Obaseki was alleged to have been detained while acting as a money coureier for the governor.

“The arrest had nothing to do with money laundering. I wonder why people will say I was arrested with $2 million in my pocket or suitcase for the Governor.

“The Governor is too big for that as he was already rich before he became Governor of the State; he is an investment banker and can’t do that; that was primitive politics,” he said as he kept mum on the reason for his more than one year detention.

Vowing to press the case of more than 300 Nigerians in Italian jails he claimed were illegally detained, on trumped-up charges, the former Edo Commissioner, said:

“We have over 300 Nigerian youths in Italian prisons illegally arrested and incarcerated for false allegations of mafia-related crimes.

“I have a list of all of them and I am making contact with their families; I made a promise to them that they will not be forgotten.

“We will campaign against the corrupt Italian Justice system and I am going to lead a protest to the Italian Embassy within the next four weeks.”