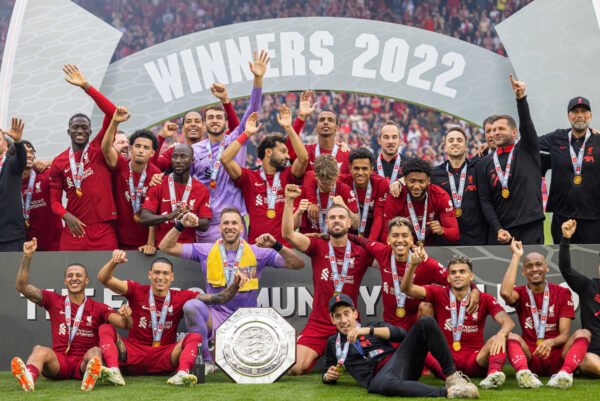 Liverpool have lifted the first silverware of the 2022/23 campaign by defeating Manchester City 3-1 in the FA Community Shield at the King Power Stadium. Jurgen Klopp’s Reds courtesy of Trent Alexander-Arnold, Mohamed Salah and new signing Darwin Nunez saw off City to bring home a first Community shield title in 16 years.

Liverpool who won the FA Cup and League Cup last season faced off against Premier League champions Man City, and it was yet again a cracker as predicted. Trent Alexander-Arnold who has become a natural provider for Liverpool, got on the score sheet himself, curling in a shot from the edge of the box after being teed up by Mo Salah. It was a disappointing first 45 minutes from City as new signing Erling Haaland completed the fewest touches of any player in the first half.

City grew into the game in the second period and started to get in their stride and eventually got the equaliser when substitute Phil Foden and newly recruited Julian Alvarez combined to make it 1-1. The former River Plate man had to wait for confirmation from VAR to celebrate his first goal in Man City colours. Liverpool then went ahead again as Mo Salah scored from the spot seven minutes from full time. £100 million signing Darwin Nunez then added to Pep’s misery as he made it 3-1 from close range, scoring his first goal for the Reds and securing a first silverware of the season.

• Julian Alvarez is the third Argentinian to score in the Community Shield, after Sergio Aguero (x2) and Carloz Tevez, with all three players netting for Manchester City.

• Mo Salah has been directly involved in 13 goals for Liverpool against Manchester City (8 goals, 5 assists), his most against a single side for the Reds. His eight goals against Man City since 2017-18 is the most any player has scored against the Cityzens in this time.

• Darwin Nunez is the fourth player to score on his debut for Liverpool under Jurgen Klopp after Sadio Mane, Mo Salah and Virgil Van Dijk.