Oshiomhole Compiled List Of My Commissioners In His Living Room - Obaseki 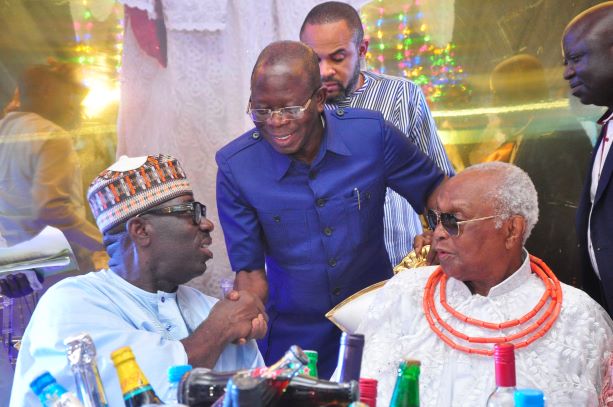 Governor Godwin Obaseki of Edo State has disclosed that Comrade Adams Oshiomhole compiled the list of the state’s commissioners in his living room in 2016.

Reacting to an interview granted by Oshiomhole at the weekend, where he claimed that he begged to have just one commissioner in his government, Obaseki to the contrary said that besides the commissioners, that Oshiomhole also appointed the governor, deputy governor and the Secretary to the State Government, SSG.

Obaseki speaking through his Special Adviser on Media, Crusoe Osagie, the governor said:

“We are once again forced to call the attention of members of the public to Comrade Oshiomhole’s ability to compulsively falsify the facts. The ease with which he lies, especially on issues that are public knowledge, underscores the content of his character and portends an existential threat to the survival of the APC and the impeccable integrity of President Muhammadu Buhari, who is forced to continuously engage with Comrade Oshiomhole being the national chairman of his party.”

He said, “If indeed Oshiomhole appointed only Mika Amanokha to Governor Obaseki’s cabinet, why then did the former governor scream to the high heavens and embark on vitriolic media attacks against Obaseki when the governor reshuffled his cabinet, taking out some persons who were sabotaging the administration at the behest of Comrade Adams Oshiomhole. In fact, Comrade Oshiomhole compiled the list of those to be appointed commissioners in Edo in his sitting room in 2016, asides picking the governor, his deputy and the SSG.

“Comrade Oshiomhole, indeed, has not kept his dishonesty and inability to abide by due process and the provisions of the constitution to his destructive activities in Edo’s political space, he has exported it to the Federal level of government, placing the presidency under undue pressure leading them to take decisions that run afoul of due process and the constitution.

“A case in point is the recent incident when the President was away from the country and Comrade Oshiomhole got top officials at the presidency to approve the composition of the board of the Niger Delta Development Commission (NDDC), made up of his cronies apparently in violation of the existing rules.

“Uppermost on Comrade Oshiomhole’s mind was his desire to annex the NDDC and make it a slush fund from where he expected to finance the political tension in Edo State towards possibly seizing control of the Edo State Government from Governor Obaseki. He did not care whether the rules were followed nor the integrity of the people being appointed. All he wanted was to achieve his aim and keep Edo State under his stranglehold as the new godfather.

“Fortunately for Nigerians and Niger Delta people, our calm and methodical President, Muhammadu Buhari, has since seen through Comrade Oshiomhole’s mischief and ordered the forensic audit of the NDDC and the re-composition of the illegal board which Comrade Oshiomhole was trying to emplace.”

Osagie said it has become clear that it is second nature to Comrade Oshiomhole to be dishonest, not to play by the rules and respect the authorities, making him dangerous to the survival of the APC.

He called on the National Executive Committee (NEC) of the APC to do the needful and rescue the party from imminent implosion, by setting Oshiomhole aside as the national chairman.

He added, “Apart from no longer having the support of his people, having been suspended from the party at the ward, local council and state levels, Comrade Oshiomhole also lacks the moral rectitude to continue to function in the office of the National Chairman of the APC. The earlier this is done, the better for the party and Nigerians.”