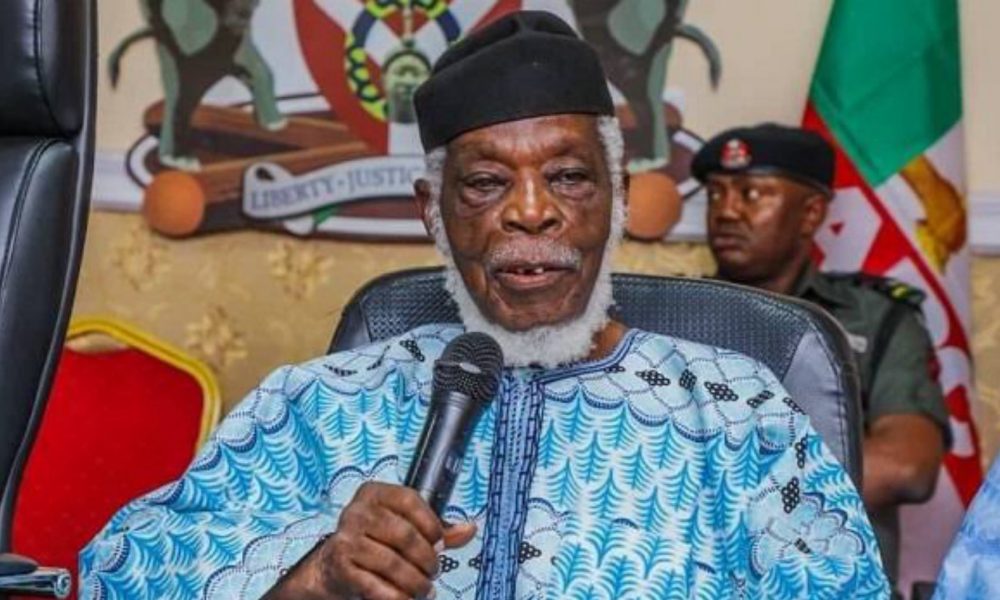 The death of Chief Ayorinde Fasanmi, on July 29, 2020 has again reinforced the saying that no matter how long we live, our time here remains transient. Even though Baba Ayo Fasanmi died at an advanced age of 94 years, his death is a monumental and personal loss to me. As the African adage says “the death of elder in African is like a library set on fire”. This aphorism is much truer with the fallen socialist ideologue and Ekiti elder. Even in his advanced age, Chief Ayo Fasanmi had a mind as sharp as the razor and a photographic memory of past event with undiluted clarity. He was a living library in Nigeria’s political history, wisdom, knowledge and native intelligence.

His death has, therefore, robbed me of a godfather, counsellor, an advocate and a father. A good man has left us. We will sorely miss him but we are consoled that Baba’s entire adult life was dedicated to selfless service. He lived his life in the fear of God and for the advancement of humanity. He joins three other prominent Ekiti icons who recently went the way of the ancestors: Evangelist Bamidele Isola Olumilua, Pa SK Babalola and Sir Oluremi Omotoso. In the space of three months, Ekiti has lost some of our most invaluable elders and statesmen.

Born in Lagos in 1925 to a struggling family of an Iye-Ekiti father and an Ijero-Ekiti mother, Chief Ayo Fasanmi’s early life was wrought in the furnace of struggles. He had an almost blighted beginning that blurred a possibility of a great future before him. Although he enrolled in the primary school at St. Paul, Ebute-Meta in 1935, he had to abandon his education only to return to it in 1937 at St. Marks, Offa, Kwara State, through the long arm of providence. By the time he finished his primary education in 1941, he was the only candidate who passed his common entrance, a feat which earned him a scholarship to study in Government College, Ibadan. He passed out in 1946 and got admitted to the School of Pharmacy, Yaba in 1947, he finished his training in Pharmacy in 1951 and was posted to Osogbo and he had since then made the town his home. It was in Osogbo that his path crossed with my Dad’s who was a civil servant – a Public Enlightenment Officer – a relationship that endured till my Dad’s demise in 2009.

Baba belonged in the class of the youths of the 1950s when the nationalist movement was at its feverish peak. He got indoctrinated into nationalism struggle through the forceful writings of Dr. Nnamdi Azikwe and his contemporaries who used the instrumentality of the media to etch an indelible impression on the minds of the young students of that era.

He had been politically conscious and active in democratic activism right from his secondary school days along with his bosom friend, Dr Tunji Otegbeye. Chief Fasanmi started manifesting what would become his most precious brand identity, “integrity” while he was the Food Prefect at the Government College, Ibadan. He ensured food meant for the student was accounted for without a query. He was a true Ekiti man, an unrepentant Awoist, a progressive politician of note and a veteran democratic activist. Since he joined the Action Group and became the Chairman of the Youth Association in the 1950s, where he worked with other notable progressive youths of his time such as Chief Soji Odunjo, Sikiru Shitta-Bay, Prof, Banji Akintoye, Prof. David Oke and a host of other vibrant and intelligent young people, who became the driving force of the rapid expansion of the AG in the south west, he remained unconditionally committed to the progressive column of the political divide.

He proved his political mettle in 1964 when he was elected as a member of the Federal House of Representatives before the military struck in 1966 and he got imprisoned in Agodi Prison before he was later released. By the time democracy returned in 1979, he was a major participant in the politics of that time in the old Ondo State. He offered to serve as governor of the old Ondo state in 1978 and slugged it out with Chief Michael Adekunle Ajasin who defeated him in the primary. He eventually went to the Senate along with other iconic Ekiti bests such as Prof. David Oke and Prof Banji Akintoye where they distinguished themselves and became exemplars.

His love for Ekiti was without doubt. It was the singular motivation for his seeking to be Governor in 1978. By 1983 even as a serving senator, he still remained resolute about an Ekiti man becoming the governor of the State and he believed the best route to an Ekiti governor was to support Chief Akin Omoboriowo who was challenging the incumbent governor then as deputy governor. Even though Omoboriowo did not support his previous effort in 1978, he volunteered to serve as the chief campaigner for Chief Akin Omoboriowo in his determination to ensure an Ekiti man was governor in 1983. He stoutly disputed the outcome of that election and wrote many protest letters to the party hierarchies, including a handwritten petition to the Leader, Chief Obafemi Awolowo seeking the nullification of the primary.  But for him, party decision was supreme!  So, when the dust of the crisis heightened and Chief Omoboriowo elected to decamp from UPN to NPN, Chief Fasanmi characteristically refused to leave the progressive fold, he stayed back to support Chief Adekunle Ajasin.

He would be fondly remembered as one of the titanic veterans who stood up to confront the murderous regime of Gen. Sani Abacha. And at the return of democracy, he was the National Vice Chairman of Alliance for Democracy. When the schisms erupted in the fold of Afenifere and the Alliance for Democracy, Chief Fasanmi worked relentlessly to salvage the situation. He had to join hands with the more youthful arm of the group to chart a new path which gave birth to Action Congress, the party on whose ticket I first contested in 2007. He played an important role in the transformation of AC to ACN and APC in its evolutionary curves. Until his death, he was the Leader of Afenifere (Ilosiwaju Yoruba) which espouses socio-political interest of the Yoruba people.

Since my coming to politics, Baba has been a tremendous pillar of support. He was a dependable, reliable, unwavering and consistent mentor, leader and ally. Hardly a week passed in my last fifteen years in partisan politics without an exchange between us. He was a fearless man who courageously expressed himself without minding whose ox was gored. He would give without asking. He was a stabiliser and one to run to in the moment of crisis.

One legacy for which Baba would be fondly remembered was his credential of incorruptibility. He was a man of tall integrity and honesty. It would be recalled that he was the first to start the Anti-Bribery and Corruption Committee in 1973 under Col. Oluwole Rotimi of the Western Region. He would go round roads and highways to arrest police and other enforcement agencies who were collecting bribes on the roads, in his determined commitment to stamp out corruption in Nigeria.

One event that further bore eloquent testimony to his high integrity quotient was the 1994 Constitutional Conference debacle, when the Yoruba nation spoke with one voice that all Yoruba delegates serving in the Constitutional Conference of Gen. Abacha, should return home. Chief Ayo Fasanmi was one of the reliable compatriots who heeded the call and joined hands with his brothers to form NADECO to push for the end to military rule. He is one of the unsung heroes of our democratic struggle and one that we should never forget his immense sacrifices to national development. He always held fervently that the things he would want to be remembered for was to be seen as a committed Awoist, a man of integrity and a man who fought for the cause of the downtrodden. He never failed in them. He remained a committed Awoist till death and defended the good name of the sage at every opportunity.

I deeply appreciate the invaluable support and unconditional love that Baba showed me. He must have visited me more than three times this year alone. He ceaselessly called to offer advice and provided leadership whenever occasions demanded.

As a token of appreciation to his contribution to the development of Ekiti, Nigeria and humanity, and particularly for being an embodiment of the finest Ekiti values, my government named one of the newly created secondary schools after him. I am glad we did this during his life time. My only regret was that he has now left us before the school will be officially inaugurated for academic activities when schools finally reopen.

Chief Ayo Fasanmi has come, he has seen and conquered. He conquered human cravings, vanity of power, ostentation, greed and malice. He was a man of simple taste, amiable, peaceable and selfless. He jealously guarded his reputation and lived within his means. He was a man of peace and a balanced arbiter who enjoined the confidence of everyone around him.

As one of the first generation of trained pharmacists, Chief Ayo Fasanmi personified pharmacy practice. It was a profession he practised all his life and to which he was totally committed. He was a former Chairman of Pharmaceutical Society of Nigeria, Oyo State, for many years before he became the President of the Society in 1977 – 1979. He became a fellow of the Society in 1978 and had remained a major figure within the Society.

He was a devout Christian whose Christianity manifested in the judicious manner he related with everyone he encountered. Until his death, he was the Baba Ijo of St. John Anglican Church, Iye-Ekiti and one of the patrons of the All Souls Cathedral Osogbo where he worshipped for most of his life.

He was a proud Ekiti man, a faithful husband to his late wife, Late Madam Adejoke Fasanmi to whom he had been married since 1953, until she passed away in 2014. Baba had determined that both of them would be buried in the same grave, to sleep on each other till eternity. Even in death, he remained committed to the love of his life!

Adieu Baba Ayorinde Fasanmi, a quintessential Ekiti elder, a distinguished pharmacist and a dogged fighter, an astute politician, a devout Christian and a loving family man. We will continue to raise the banner of service in the progressive tradition that you and your peers have bequeathed us.

He will be fondly remembered for his integrity and commitment to the progressive politics. On behalf of my wife, government and good people of Ekiti State, I hereby express my sincere condolences to his family and the entire people of Iye-Ekiti. May his gentle soul rest in peace.