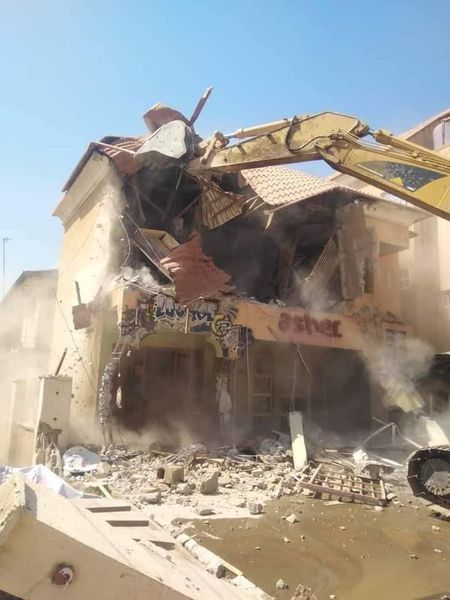 A one-storey building that was to have served as the venue for the aborted Kaduna Sex Party was demolished by the Kaduna State Government on Thursday.

The demolition of the building located in Sabon Tasha area of Kaduna South came as of the brains behind the Kaduna Sex party opened up on the aborted party. He blamed a female invitee for putting the invite on twitter and thereby drawing the attention of the authorities.

“The law has vested the agency the power to demolish any building that contravenes the rights of occupancy, for instance, if a residential building is turned into something other that the purpose it was meant for, the law gives us power to demolish such property especially if it’s against public interest.”

“We were in Narayi, another suburb in the state to carry out similar assignment. We are currently demolishing another building that promotes illicit acts.”

One of the organisers of the party who refused to give his name was on Thursday paraded by the police at the Kaduna Command headquarters.

The suspect who said the Kaduna Sex party was not meant for everyone said it was supposed to be a very private affair but that it was leaked to social media by an excited lady.

“I never posted the party invite on Twitter. Yes, I initiated it, yes, it started as a joke, I keep saying it, it was not meant to disturb the peace and security of Kaduna.

“The whole thing was a joke. A friend made the flier that was posted on Twitter and put my number on it and we all laughed over it, but somebody sent to someone and to another person like that, until it got to Twitter.”

Related Topics:headlinesKaduna Sex Party
Up Next

Jos Man Sets Self Ablaze After Fight With Father