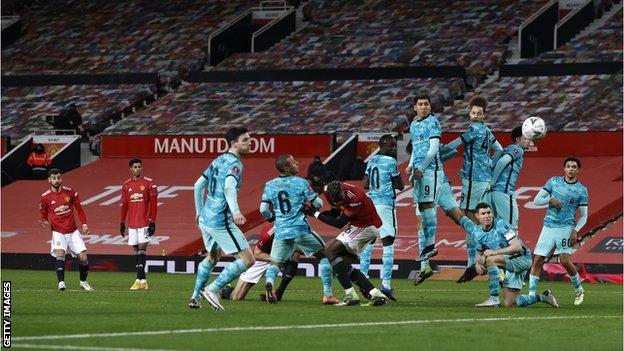 Manchester United eliminated Liverpool from the FA CUP after a pulsating 3-2 victory at Old Trafford. Ole Gunnar Solksjaer’s Red Devils displayed doggedness from the beginning till the end of the fixture to advance to the 5th round.

Mason Greenwood had the first attempt on goal in the 9th minute as the home side played with so much attacking intent. However, his low shot from inside the box was saved by Allison Becker.

One minute later, Trent Alexander-Arnold whipped in a cross which Dean Henderson pushed away from goal. At the other end, Mason Greenwood maneuvered his way into space and fired wide.

The opening goal of the game was scored in the 18th minute by Mohammed Salah after he was picked out by Roberto Firmino. It came with style.

The Egyptian goal poacher dinked the ball over an onrushing Henderson to hit the first blow.

Jurgen Klopp’s outfit were galvanized by Salah’s goal as Arnold and Curtis Jones made good efforts to extend the lead.

However, the second goal of the game would be delivered by Mason Greenwood in the 26th minute. The youngster was the beneficiary of a spectacular pass from Marcus Rashford to release him, all he needed to do was to place the ball hard and low beyond Allison to give United a much needed equalizer. He was third time lucky after he fired wide in his previous two attempts.

Afterwards, Paul Pogba and Scott McTominay failed to keep their headers down from inside the box as Luke Shaw provided a couple of inviting crosses from corner kicks. Pogba, who had been in a rich vein of form coming into the clash, shot wide from a free kick on the edge of the box before the halftime break as both sides went into the tunnel stalemated at 1-1.

Three minutes into the second half, provider turned goalscorer as Marcus Rashford put United ahead. After receiving the ball from Greenwood, he shot underneath the reach of Allison who got a hand on the ball before it crept into the net.

With Liverpool trailing they threw men forward as James Milner missed a chance from close range before Mohammed Salah restored parity in the 58th minute for his second goal of the game.

Six minutes after the hour mark, Salah was denied a hat-trick by Dean Henderson. Salah didn’t get enough power behind the ball to beat Henderson in goal.

During the course of the game, both managers made notable tactical alterations as Ole Gunnar Solksjaer brought in Bruno Fernandes for Donny Van De Beek while Jurgen Klopp threw on Sadio Mane. A red hot Bruno Fernandes scored a delightful free kick in the 78th minute to fire United into the lead for the second time in the game.

That lead will eventually last till the final whistle of the game as Liverpool crashed out painfully after a good fight. More infuriating for Jurgen Klopp and his players was the fact that they lost to their arch rivals.

What Is Cost Of Lampard’s Sack To Chelsea?