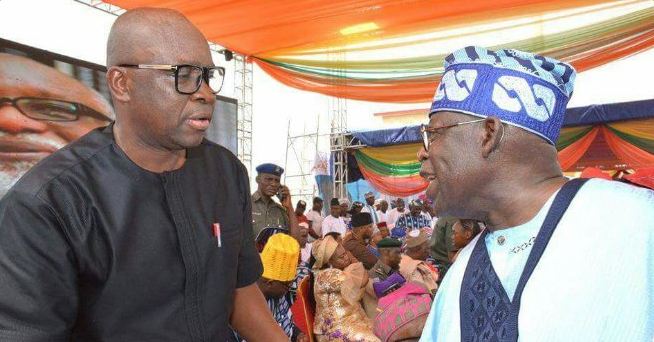 Ayodele Fayose is working to undermine the PDP in the Southwest to actualize the presidential aspirations of Bola Tinubu, a group, Concerned South-West Professionals (CSP) has said. The group believes that Fayose’s anti-PDP antics is to help Tinubu realise his presidential goal it said on Thursday.

The group has thus called on the national headquarters of the PDP to call the former Ekiti State governor to order, saying his antics were capable of ruining the party in the South-West geopolitical zone.

According to the group, the former governor is on assignment in the South-West to create division within PDP in order to actualize the presidential ambition of his new godfather in the ruling All Progressives Congress (APC), Mr Bola Tinubu.

In a statement released in Lagos and signed by its publicity secretary, Alhaji Ismail Adeyemi, the group said any attempt by the national leadership of the PDP to merely look on while Fayose decimates PDP in the South-West would not augur well for the party.

The statement read: “An ex-governor who could not deliver his state to PDP during the last governorship election in Ekiti is going about, hobnobbing with the opposition, casting aspersions on the only PDP governor in the South-West, Mr. Seyi Makinde, and organising parallel congresses.

“Nigerians cannot have forgotten how Fayose consistently opposed former Governor Olusegun Mimiko while the latter served as chairman of the PDP Governors Forum towards the end of his (Mimiko’s) tenure and succeeded in driving him out of the party with his recklessness and bigotry.

” Fayose treated Mimiko, who had been in politics long before him and was his senior in age, with utter scorn, assassinating his character and pouring invectives on him.

“Yet when Fayose succeeded Mimiko as chairman of Southern PDP Governors Forum, nobody struggled with him for that particular position.

“For him now to be going about maligning Governor Seyi Makinde beats the imagination, although we are not surprised because his history of dictatorship, crudity and self-aggrandizement is well known.

“Fayose is on record as pouring invectives on elders of the party, some of whom are old enough to be his father, and it is astounding that members of the NEC and NWC of PDP have kept quiet while he continues to stoke divisions and rancour in the party.”

CSP added that governance is not a matter of age, as many governors have parents and even grandparents but everybody respects their authority.

“By  undermining the governor of Oyo State, Fayose is insulting the party executives as a collective.

“He should be called to order before his divide and rule tactics causes chaos in PDP,” the group said.