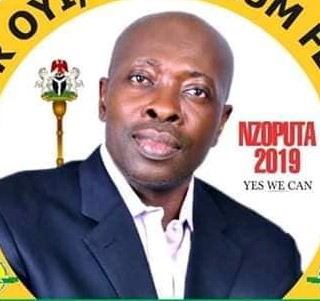 A chieftain of the All Progressives Congress (APC) in Anambra, Chief Ekene Enefe, says the party has bright chances to win the Nov.6 governorship poll in the state but must work hard.

Enefe said this during an interactive session with newsmen in Awka on Monday, warning the party not to rely on “federal might” to achieve victory.

He charged the party leadership and aspirants to take their campaigns to the communities and ensure the grassroots became part of their electioneering.

He said that although the goodwill President Muhammadu Buhari enjoyed in the South-East was a huge advantage, “the aspirants must not be carried away and rely on Abuja or federal might alone for victory”.

He urged the aspirants to unite and rally support for any of them that would emerge from the primary in the interest of the party.

Enefe also urged the party leadership to conduct a primary election that would reflect the wishes of a majority of the members.

“The chances of APC are very bright in Anambra because of the failure of the All Progressives Grand Alliance-led government to fix the infrastructure deficit and security challenges.

“We cannot talk about winning election in Anambra without counting on Buhari’s achievements in the state and southeast in general.

“This is the time for APC to takeover the mantle of government in Anambra but we are not doing enough.

“I expect the party to develop a robust grassroots based campaign. We should not rely on any power or connection anywhere.

“This election has to be seen to be won freely and fairly.

“The electorate want those they can trust. The aspirants have to touch the base. They need to carry the grassroots along.

“They should roll up their sleeves and get to work,” the APC chieftain said.

He threw his weight behind the call for a president of Igbo extraction in 2023 but urged the people to reach out to other regions in the effort to achieve its objective.

He also urged the political class from the zone to work to ensure that it presented its best for the raçe in 2023.

He advocated that the youths from the zone be given a chance, pointing out that available evidence showed that the best preforming ministers in the present Federal Government were youths.

“When we talk about presidency of Igbo extraction, its not just about southeast because we have other people of Igbo race outside the zone

“So, we have to look inward and support our own wherever they are.

“The zone should begin to work towards next presidential election,” he said.

Why I Am Better Than Soludo, Umeoji For APGA Ticket – Nwankpo