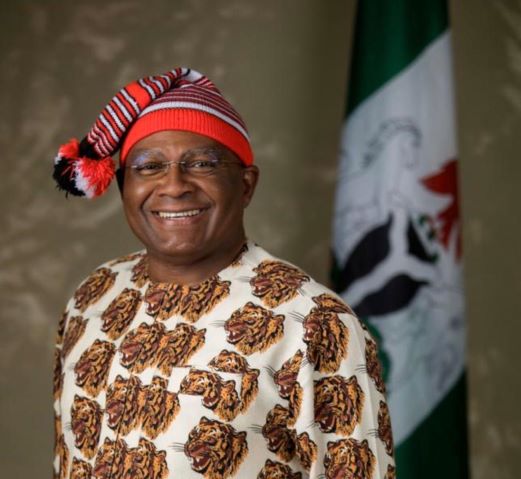 Unquestionably, Senator Chimaroke Nnamani is one of the leading intellectuals in the 9th Senate of the Federal Republic of Nigeria. He was in the 6th Senate (2007-2011) when Senator David Mark held sway as the President of the Senate. This was after his eight year stint as Governor of Enugu State between 1999 and 2007.

It was Senator Nnamani in 1999, who enriched the nation’s political lexicon when he coined the phrase “Dividends of Democracy”. For him, provision of infrastructure, gainful employment, provision of healthcare facilities and quality education among others are dividends of democracy.

That was vintage Nnamani speaking at the Annual General meeting of the Pharmaceutical Society of Nigeria (PSN) held in Enugu that year. Senator Eme Ufot Ekaete was the President of PSN then.

As the then Governor of Enugu, he demonstrated his intellectual prowess with his Ebeano lecture series which dissected a range of topical national issues.

In the 6th Senate, he was the Vice Chairman, Senate Committee on Foreign Affairs. Senator Jubril Aminu was his Chairman. At plenary one day, Senator Aminu was billed to present the committee’s report on the floor of the Senate but delegated Senator Nnamani to do so on behalf of the committee.

The usual practice when presenting a report is that the Senator reads the report from a prepared text before submitting to the Senate President. On this particular occasion, however, Nnamani took everyone by surprise when he stood up to present the entire report extempore. The senate was in pin drop silence as Nnamani eloquently presented the voluminous report without looking at any documents.

Senator Mark in accepting the report said: “Thank you Senator Nnamani. This is brilliant, this is novel. Only an intellectual like you can do this.” That presentation remains a reference point in the Senate.

Nnamani was out of the 7th and 8th Senate in circumstances akin to political exile. For the political thoughtfulness of Governor Ifeanyi Ugwuanyi of Enugu State he returned to the red chamber in the 9th Senate. Prepared for the legislative assignment, Nnamani immediately stamped his authority as one of the gifted speakers with versatile knowledge and analytical depth.

From the onset, he declared that his focus in the 9th Senate would be to participate in the debate on the Nigerian project to make it work better for all Nigerians. He stated: “My coming to the Senate on a second mission is driven by a greater sense of the need for the ‘sleeping giant’ called Nigeria to wake up from her slumber.” He expressed optimism that the Senate would serve as a veritable platform to drive the sincere dialogue and educated debate required to engender a united, prosperous and peaceful Nigeria where the welfare and security of the citizens will be the overriding mission and purpose of the government.

He craves for an egalitarian society where no one is oppressed; where every citizen is free to carry out his or her legitimate business in any part of the country without fear of intimidation or molestation. Nnamani believes in justice, rule of law and the flowering of the comparative advantages of the constituent ethno-regional segments in a true physical and fiscal federalism.

The tone of the 9th Senate was set when the Senate President, Dr Ahmad Lawan constituted an ad hoc committee to prepare its legislative agenda, with Nnamani as a member.

The screening of ministerial nominees was the first serious task of the 9th Senate. On July 29, 2019, Nnamani demonstrated the stuff in him while endorsing the ministerial nominee from his home State of Enugu, the present Foreign Affairs Minister, Geoffrey Onyeama, describing his Oxbridge pedigree, noble upbringing and finesse in such effulgent prose that drew spontaneous applause from his colleagues across the aisle as they chanted Ebeano! Ebeano! The video clip of that presentation soon went viral on social media, receiving over 100,000 views on Youtube alone.

Nnamani again captivated national and international audiences when he became the only Senator to oppose the social media control bill. In an impassioned delivery that resonated round the civil society and the online community, the Senator argued that there are legislations in the country that address defamation, slander and peddling of fake news.

He emphasized: “In principle I not only oppose this bill, I condemn it in its entirety. This bill is an attempt to surreptitiously introduce censorship into our laws… This bill is pure censorship; it has no business in 2019 Nigeria.  I therefore vigorously oppose this bill”. The video of the speech also went viral on the internet, stunningly garnering over 168,000 views on his official Facebook handle.

He is a recognized champion of women and child rights. On October 11, 2019 he called for legislation to eliminate all forms of discrimination against women and the girl child.

The former Governor proved that his commitment to girl child education and gender equality was far beyond lip service when in January 2020, he paid the West African Examinations Council (WAEC) fees for the approximately 4,000  female final year students in all the public secondary schools in his Enugu East Senatorial District.

Nnamani’s penchant for advocacy and informed debate is exemplified by the vibrancy of his contributions to motions on the floor of the senate. The motions he has strongly supported are all pointers to his abiding concern for the well-being of the ordinary folks, with health and education as his major priorities.

Among them were the one seeking to avert the impending strike by Senior Staff Association of Nigerian Universities (SSANU) and Non Academic Staff of Nigerian Universities (NASU), motion for federal government’s provision of emergency medical care to victims of road accidents, motion for the reform of primary healthcare in the country, motion urging the Federal Ministry of health to improve HIV surveillance in the country, motion seeking to check pneumonia and reduce child mortality, and yet another one on special funding for mental ill health in the country.

His voice was audibly heard when he condemned the brutal killing of a pregnant woman in his constituency by suspected killer herdsmen, condemning it as “odious and dastardly.” He also drummed support for federal government assistance to victims of the October 2019 fuel tanker fire disaster at Upper Iweka market in Onitsha, Anambra State.

He spoke with evident professional insight on the motion seeking to investigate the alleged blindness caused by Avastin injection at the National Eye Hospital Kaduna and was eventually appointed into the adhoc investigative panel on the incident.

Nnamani is an active participant at the committee sessions of the various committees, including the Senate Committee on Women Affairs where he is interestingly the only male member, the Committees on Health, FERMA, Land Transport, Diaspora and NGOs, Drug and Narcotics where he is the Vice Chairman, and of course the Committee on Cooperation and Integration in Africa/NEPAD which he chairs.

He has raised a strong voice against national security challenges across the country calling for dialogue of all ethnic nationalities to talk with a view to finding lasting solutions. For him, there is no need to shy away from the fact that the nation is engulfed by debilitating security issues. Moving forward he said there is a need to talk under an environment of mutual respect, give and take situation so that Nigeria can be great again.

Also within this period he took his advocacy for a new Nigeria that works for all citizens to the leading news platforms like Channels TV, AIT and Arise Television. In the Senate today, people are always anxious to hear Nnamani make contributions to debates and motions. When he does, everyone listens attentively to a man widely seen as one of the most brilliant, confident and outspoken Senators in the red chamber.

As Senator Chimaroke Nnamani, the founder of Ebeano political dynasty turns 61 years today (May 30, 2021), it is expected that he retrospects, thanks God for an eventful journey so far and continues with his avowed commitment to serve God and humanity in the years ahead.

The Things About Midnight Prayer