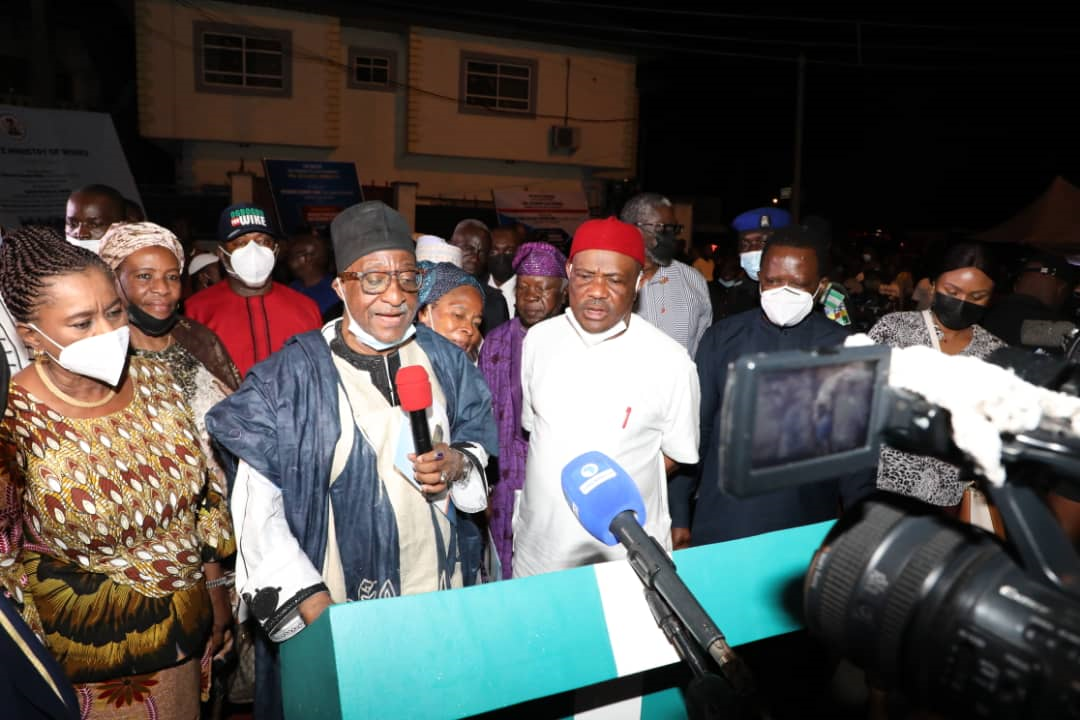 Governor of Rivers State, Nyesom Ezenwo Wike says it is hypocritical for the All Progressives Congress, APC to contemplate banning or regulating  social media after using it to hoodwink Nigerians to attain power.

He argued that the APC led government has miserably failed, and wants to use its disagreement with Twitter as a false  premise  to suppress criticism of the administration’s appalling  handling of the affairs of the nation through the dubious regulation of social media.

The governor, who make this assertion during the inauguration of nine reconstructed streets: Nzimiro, Herbert Macaulay, Amassoma, Arochukwu,  Atako, Ogoja, Akure, Yola and Chinwo in Old Government Residential Area of Port Harcourt, noted that APC having become the butt of jokes on social networks, is desperate to trample on freedom of expression of Nigerians.

Wike, continuing, said: “Now, you want the same social media to be regulated. You don’t want freedom of speech. Now, you want to gag them. Did anybody gag you when you were using them?”

Governor Wike said the kidnap of scores of students at Federal Government Girls College, Birnin Yauri, Kebbi State on Thursday, was a further demonstration of APC gross ineptitude to guarantee safety of  lives and property of Nigerians.

According to him, Nigerians are anxious for the APC to quit power and allow the more experienced Peoples Democratic Party (PDP) to once again restore stability in the polity and dignity of the nation.

The governor also took at swipe at the presidency for berating PDP governors, who demanded for transparency and  accountability in the way the Nigerian National Petroleum Corporation (NNPC) is managed and that the APC led government should be alive to its constitutional responsibility to protect lives and property.

“In Kebbi, 40 to  50 girls have been kidnapped , our young daughters. And then, you are telling me we (PDP) have not proffered solution. Which solution are you talking about? The President is the Commander in Chief of the armed forces of the Federal Republic of Nigeria. It is the president that appoints all the security heads in this country.

“No governor has the power or any role to appoint even a Commissioner of Police. And then you are telling me that we have not proffered any solution. What solution do you want us to proffer? When you have taken your oath of office that you are going to guarantee the lives and property of Nigerians.”

Governor Wike noted that even President Muhammad Buhari during his recent television interview, disclosed to Nigerians that he has nothing left to offer the country in terms of good governance.

“The president spoke to us the other day and Nigerians were happy the way he spoke to them, he told them the truth. And the truth is that whether you like it or not, I have nothing again to offer and that was the truth. And people must agree to that,” Wike said besides his mockery of the APC’s plans against social media.

The governor said his administration has deliberately embarked on massive urban renewal drive aimed at restoring the Garden City status of Port Harcourt.

According to him, it is regrettable that past administrations in the State did not consider it appropriate to restore the lost glory of Port Harcourt.

Chairman of the Board of Trustees (BoT) of the  PDP, Senator Walid Jubril, who inaugurated the nine streets, commended Governor Wike for transforming Port Harcourt, such that even the blind can attest to it.

Jubril said the entire board of trustees of the PDP  is proud of Governor Wike’s steadfast commitment to the PDP. According to him, party stalwarts across the country, are impressed with the governor’s remarkable achievements and leadership.

“Anybody, who is from this State and is trying to go astray , I am not with him. I am with the people of this State and I will remain with you (Wike).”