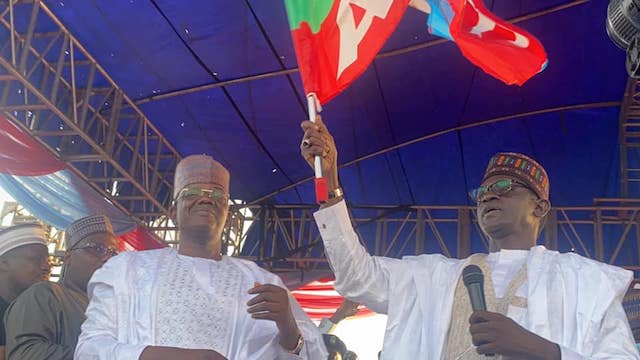 Governor Bello Matawalle at his defection to the APC in Gusau

The National caretaker committee chairman of the All Progressive Congress (APC), Alhaji Mai Mala Buni has announced the dissolution of Zamfara APC executive council from wards, local government to state level following the defection of Governor Bello Matawalle to the party.

Buni spoke during the formal defection of Governor Bello Mohammed Matawalle to the APC in Gusau, the state capital.

He said Matawalle would remain the leader of the party in the state and the party exco stands dissolved, urging all stakeholders to support the governor in delivering good governance.

Speaking at the event, former Governor Abdulaziz Yari who had months ago rebuffed moves by Matawalle to join the party, said he had accepted the party’s decision and he would be ready to offer all necessary support to Governor Bello Mohammed Matawalle to succeed.

“We will support the state governor and I want remind him to be wary of sycophants so that the cordial relationship being enjoyed will not be truncated.”

In his address, Matawalle said as the leader of the party, he would make sure that every party faithful is treated with justice and fairness.

The governors of Katsina, Borno, Ogun, Plateau, Kano, Kogi , Kaduna, Jigawa, Niger and Kebbi states, Secretary to the government of the federation, ministers , senators, members of house of representatives were in attendance.

Why I Sacked 17 Commissioners – Makinde