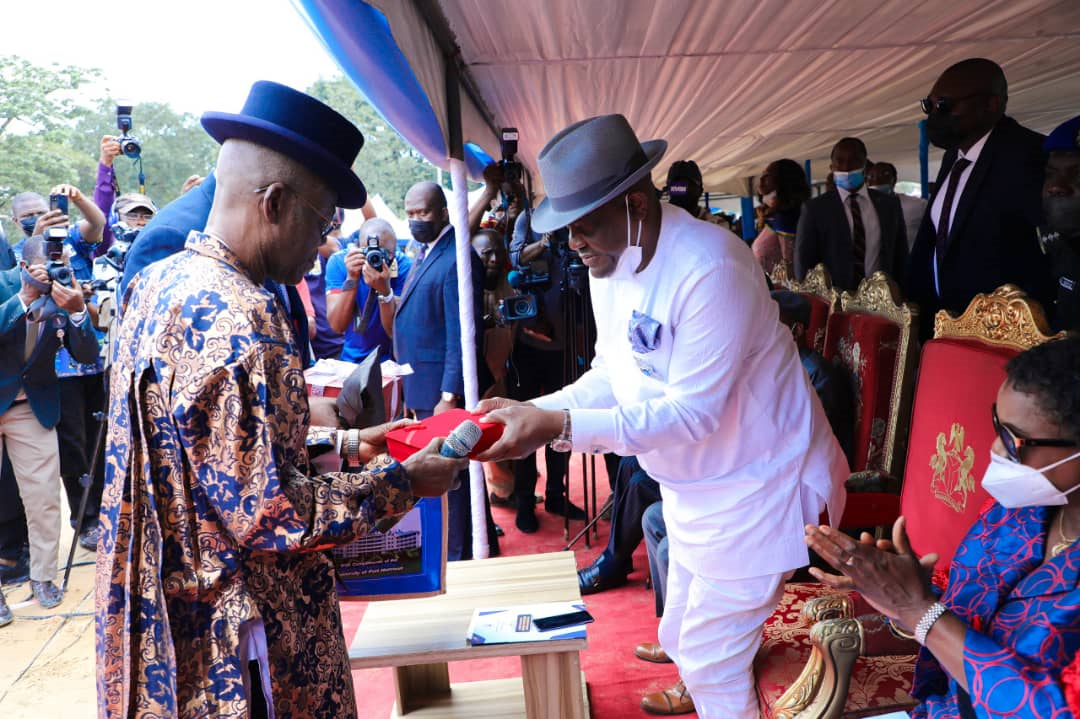 Governor Nyesom Wike of Rivers State has warned university Vice-Chancellors and lecturers to be wary of attempts by some unscrupulous politicians to use them to manipulate elections, declaring that those contemplating rigging elections in Rivers State will be treated as coup plotters.

He stated this during the foundation laying ceremony for the construction of 9200 capacity ultramodern convocation arena of the University of Port Harcourt by the Rivers State government on Tuesday.

Governor Wike said it is worrisome that Nigeria has degenerated to the point where politicians now influence who becomes a Vice-Chancellor of a federal government for the purposes of rigging elections.

“Let me warn, not one person will dare to rig election in Rivers State. Not one person will dare it. I have told people, allow university community to produce those who will be leaders of this country. Don’t turn the university community to be where you will have politicians who manipulate and change the mandate of the people. Anybody who does that, you know it is a coup and you know the punishment for coup plotters.”

The governor stressed that the reason why there is so much tussle these days on who becomes Vice-Chancellor of federal universities is because of political interference by extraneous forces.

He described as heartrending a situation whereby lecturers who are supposed to be revered in society, wilfully compromise their integrity,  just to become Vice-Chancellor, who will afterward be used to manipulate elections.

“These days, you see a lecturer, a Ph.D. holder, a professor ready to soil his name, to allow  himself to be kidnapped and taken somewhere to sign result  and to declare somebody who did not win election winner.”

The governor enjoined desperate politicians in the ruling party not to dent the integrity of the university system because of their inordinate ambition.

Governor Wike warned that any Vice Chancellor that allows himself to be used to rig election in Rivers State, should be prepared for the consequences of such hideous act.

The governor declared that 2023 general election will be completely different from the 2019 election which was manipulated by the ruling party. He insisted that attempts to prevent transmission to election results electronically will be resisted.

Governor Wike stated that as an alumnus of the University of Port Harcourt, his business is not to play politics in the University, but to see how he can contribute to the development of the institution.

He promised to complete a  primary school building in the university that was abandoned by the previous administration for inexplicable reason.

The Acting Vice Chancellor of University of Port Harcourt, Professor Stephen Okodudu commended Governor Wike for consistently identifying with the ideals and aspiration of the university.

“You have continued to support the successive administrations of the University through donation of funds and provision of social infrastructure to give meaning to the lives of staff and students. I recall with nostalgia, that Your Excellency attracted then construction of the Faculties of Law and Social Sciences buildings while serving as the Hon. Minister of State for Education.”

Chairman of the Governing Council of the University, Senator Andrew Uchendu applauded Governor Wike for laying the foundation for what will be the best, iconic convocation arena in West Africa.